A video of Australian coach Darren Lehmann informing about Michael Clarke’s availability for the four-day match against Pakistan A from October 15.

Australia on Monday received a huge boost when their captain Michael Clarke was declared fit for the four-day tour game against Pakistan A, ahead of their two-match Test series in the United Arab Emirates (UAE).

However, Australia are worried about the fitness of explosive David Warner, who picked a groin injury during the third One-Day International (ODI) against Pakistan, in which the tourists registered a thrilling narrow one-wicket win.

“Clarke will be fine, he’ll play the tour game. Warner, we’ll asses him in the next couple of days. If he’s not right for the tour game, he won’t play,” said Australia coach Darren Lehmann, according to Cricket Australia (CA) website. 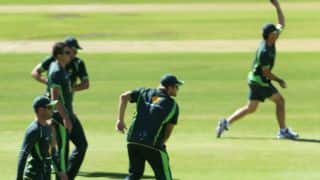