Australia’s T20 skipper George Bailey on Sunday announced his decision to step down from the T20 captaincy. Bailey who led Australia in his year’s World T20 said that he aims to focus on First-Class cricket and perform well for the Test side.

“The very end goal is hopefully to play more Test cricket, but more than that it’s just about playing the best four-day cricket I can,” said the Tasmanian captain.

“It’s the format I find the most challenging and the format that I get the most enjoyment from. It’s where my real passion lies. Whether concentrating on that ends up in me getting back into the Test squad, it doesn’t worry me too much. It’s just about playing as well as I can.”

Cricket Australia announced that Aaron Finch will lead the T20 side, The team is scheduled to tour UAE to play a full series against Pakistan. 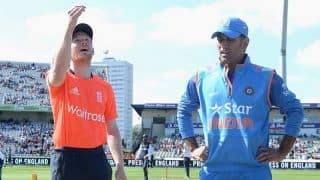