MASHRAFE MORTAZA: Yeah, we played one practice match here against Pakistan. We lost, but we've played so far well.

Q. It’s your first match of the tournament at Edgbaston; how much are you looking forward to playing here?
MASHRAFE MORTAZA: Yeah, we played one practice match here against Pakistan. We lost, but we’ve played so far well. We saw that the wicket was pretty good to bat. Hopefully we’ll enjoy tomorrow.

Q. Is this the biggest cricket match of Bangladesh’s history?
MASHRAFE MORTAZA: I’ve been answering that question since World Cup 2015. But playing in the best eight and in the semifinal, obviously there is a big hype. You can say, but I’m not sure.

Q. Does it feel maybe a grudge match because it’s India, with all the history you’ve had with them?
MASHRAFE MORTAZA: Not necessarily. I know it could have been England, it could have been anyone. So I don’t have to think that it’s India. We’ll play another match. Hopefully if we can take the pressure out, hopefully we’ll play good cricket.

Q. Virat Kohli said about the World Cup quarterfinal, it’s about 24 months and I think everyone has forgotten it. But I just want to ask you, do you think it is forgotten in Bangladesh, or is it still something that —
MASHRAFE MORTAZA: Yeah, forgot means — I don’t know what you mean. I mean, players or —

Q. Players.
MASHRAFE MORTAZA: Obviously, players. After that we played, I think — two T20s, three T20s actually and three ODIs. Still we are the same, and obviously forgot it. It is 24 months, exactly what Virat said, and tomorrow is going to be a new match. So our concentration obviously and our thinking obviously is about tomorrow’s match.

Q. A few days ago Tamim was saying that the other teams are more respectful of the Bangladeshi team now. Do you see it now, that more teams are respecting you more, now that you are winning much more frequently?
MASHRAFE MORTAZA: Look, it’s depends from man to man who is respecting you and not. But as a team we are trying to improve our cricket. As a team the last two, three years we are changing things a lot, especially into the dressing rooms and behaviour on the ground. So we are trying our best. As you said, respecting depends on you, that you are the best man to judge.

Q. Mashrafe, looking back on the historic big matches, the Bangladesh Twenty20 match against India, you could not manage to win it. Is it something of concern for you, and does it give an advantage to India?
MASHRAFE MORTAZA: People count only winning, that’s for sure, but I think if you look at both matches, I think we played at our best. Yes, India played also at their best, that’s why they won. But still, I believe we have a lot more to do in that level, and our graph is pretty good that we are coming up, especially if you look at also Bangladesh last year, and this year we keep playing and we’ve been to New Zealand, we’ve been to Ireland and now here, and also we are playing overseas, and we are pretty much successful. That’s more important for us, that our cricket is going to improve.

Obviously we have been disappointed, especially in India T20 World Cup we couldn’t go through three balls, needed two runs, and our best two batsmen in the wicket. It happens sometimes in cricket, but we forget it, and now we have to — are thinking that tomorrow we play at our best, but we can’t just think what happened the last two matches and coming into the ground it will put some more pressure to us.

Q. Mashrafe, talking about the 2015 World Cup and now this Champions Trophy, in these last two years, what exactly has happened that changed Bangladesh cricket, and where do you see the further changes happening?
MASHRAFE MORTAZA: One thing that, yes, winning against England was helping us a lot, that we go through the quarterfinals, and obviously we lost against New Zealand in New Zealand, the next match we played against New Zealand in World Cup. We scored no — on a tough wicket we scored almost 300, 295. Still, we lost, but those are things — the team was boosted up, and after that beating Pakistan and India and South Africa, yes, it was at home, but more respecting from us to beat those sort of teams wherever we played. But I think this team has changed, and obviously some divisions, like sort of play with some sort of freedom that as much as you can do in the middle, play with that sort of freedom, and never hold yourself or whatever you want to do, do yourself, coaches from us and also cricket supporting lots to the players, back the players and not dropping — those sort of things actually change teams.

Q. Virat Kohli termed your team as a dangerous team. What is that danger element in your team which gives you an edge?
MASHRAFE MORTAZA: First of all, thanks to Virat. And yes, I know that in our day we can do anything, to be honest. But things that — as I told, we are the team that is trying to improve ourselves a lot, what we have been. We have tried to play at our best in every matches. We don’t know what is going to be the result, but once you can play at your best, you know that you are going to play at your best and things can change. So even if we look at last matches, when Ross and Williamson batted really well but we come back strongly, that’s things, never give up on the ground, those sort of things actually are thinking a lot in the ground rather than losing or what’s going to happen.

Q. Obviously it’s the semifinal of an ICC event, and if you win the match tomorrow you’re going to reach the final of an ICC event for the first-ever time. Just the expectations are also huge back home; how equipped are your players do you think to handle this pressure which comes along with this expectation?
MASHRAFE MORTAZA: First thing is we’re playing also first time in our life to semifinal, so that is also a fact, and also if it’s pressure, I think India got more pressure than us because the huge population is there, and people love cricket in India a lot. Even Bangladesh, also. Both teams have a lot of expectations. But at the end of the day, it’s a cricket game, so whoever plays well, they’ll win. But both teams will try their best, and pressure, I think I just told him before that if you take it as a semifinal, the pressure will be going very hard, but if you think it’s just another match the pressure will come a lot easier. 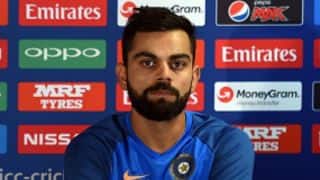 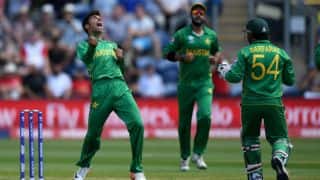