Q. Eoin, at 120 for 2, it was looking okay for getting up to a par total. Can you explain what went wrong?
EOIN MORGAN: I thought — you know, probably every partnership we had struggled to take, I suppose, initiative to the Pakistan bowlers. I thought they bowled really well. They adjusted to conditions extremely well, and the wicket was obviously slow and low and hard to get away to start with. Every partnership we had started behind the rate, which put us under the pump a little bit, and none of our batsmen seemed to get away.

Q. Do you feel like you were trying to do the right thing, but it just didn’t happen? It wasn’t sort of wrong tactics or anything?
EOIN MORGAN: I felt like we were trying to take a positive option against them, but obviously, given the conditions, it didn’t allow us to do that, yeah.

Q. Ben Stokes, 60 balls and no fours kind of tells its own tale, doesn’t it?
EOIN MORGAN: I think it does, and I think Joe Root in a similar vein. You know, he’s normally timing the ball even when he’s in a defensive mindset. The fact that he was quite sluggish at the start — I was as well, and given I’ve been in reasonable form of late, I thought it was quite tough, yeah.

Q. You touched on conditions. What did you make of them? Do you feel as though they kind of played into Pakistan’s hands a little bit?
EOIN MORGAN: I don’t think there was any home advantage, if that’s what you’re asking. We knew that we were going to play on a used wicket at some stage in this tournament, and certainly we found out the other day that today was going to be on a used wicket. And having watched the game against Sri Lanka, we actually didn’t think it was that bad.

But certainly today it was — coming from Edgbaston, it was obviously a big jump in pace and bounce and too much of an ask for us to adjust to really.

Q. Following off that, do you feel that it was kind of your side’s failure to adapt to those conditions really that cost you? And does that leave you a little disappointed, bearing in mind the talent and the skills that you’ve got?
EOIN MORGAN: Yeah, we left ourselves short today adapting to conditions. It’s a big frustration because I think we’ve played some great cricket in this tournament so far, and we weren’t anywhere close to it today.

Q. You’ve been unbeaten in the tournament. What do you think this was, a pressure match? Were you over confident, your team?
EOIN MORGAN: Certainly not, not over confident. We played against some really good sides recently, and we’ve managed to beat them. Certainly, that hasn’t gone to our heads at all. I think, going into today’s game knowing that we were going to play on a used wicket potentially brought Pakistan’s game closer to their home. So it was a big challenge and one that was too far for us.

Q. Pakistan didn’t seem to struggle in the same way on the pitch. Did it get easier, or is there some other explanation?
EOIN MORGAN: I think the explanation is they played two days ago on it.

Q. Eoin, four years ago you played the final against India in conditions that didn’t suit you. The same’s happened again today. You mentioned home advantage there. Do you think that it should be more of a factor in these tournaments? That the home side should enjoy that?
EOIN MORGAN: I think it depends on what the ICC want to get out of the tournament. If they want it to be completely neutral ground and bring all the teams into the tournament, which, you know, would have no home advantage, I would keep it the same way.

In World Cups, you know, you have fresh wickets. They can vary from ground to ground. But certainly dictating it in a certain way, if you were relating to the final that we played in, was a bit farfetched really.

Q. Eoin, did they explain to you why it had to be a used wicket. There’s eight wickets on that square, apparently.
EOIN MORGAN: As I know it, every ground gets three pitches allocated to them. They’re told to prepare three grounds. And depending on how the grounds come back from the first three games that they play determine which pitches they use, but they’re not allowed to prepare all of them.

Q. Eoin, this tournament is seen as sort of the dry run for the 2019 World Cup. What can you guys take from it as a team? Do you think you’ll be stronger for the experience?
EOIN MORGAN: I think we are, certainly. You know, one of the huge contributing factors towards topping our table and playing very good cricket in the group stages is that we’ve stayed true to what we believe in and what’s worked for us the last couple of years, and I think that’s the continued formula for the future.

I think it will have to evolve in whatever manner the game does over the next two years in the lead-in to the World Cup, but certainly I think we’re moving in the right direction. 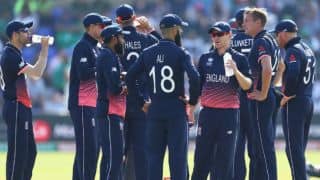