Q. Eoin, any team news for the semifinal tomorrow? Looks like you might make a change at the top of the order?
EOIN MORGAN: There’s a chance we could make a change. Obviously, won’t announce the team until the toss, but there’s a chance there could be a change. I mentioned after the last game that we’re getting to the business end of the tournament and we need to produce results. So it’s important that we get our best — well, what we feel is our best 11 to win the tournament tomorrow in order to win the game.

Q. Just watching the entirety of training, Jason didn’t really take part, and obviously Jonny took a full part. So probably not rocket science to work out what might happen. If Jonny does come in, just what would he add to the side? What do you think his qualities are that you think might be really useful here?
EOIN MORGAN: Jonny’s qualities are — I believe he’s a fantastic batsman. I think his best attribute, certainly in white ball cricket over the last year and a half, has been his relentless attitude to score runs regardless of the situation. When you have guys sitting on the sideline, they can get a little bit upset, and that can affect their performance when the actual chance comes along, but that doesn’t seem to affect Jonny.

One innings he did play for us which won us a series was against New Zealand in sort of a match-winning knock up at Durham last year — actually, two years ago, and that sort of sums him up. He came from playing in Yorkshire to coming straight into the squad, having played no part in the series, and came in and produced a match-winning knock.

So I think his all-around ability is as good as we have in this squad. But like I’ve mentioned before, it’s a very difficult team to get into, and you’ve just got to wait for that chance.

Q. Have you got full confidence in Jonny opening the innings? He’s not opened for England in a one-dayer before, but obviously he’s done it for Yorkshire to great success.
EOIN MORGAN: I’d have no worries if he has to open the batting. I certainly believe we’re in a good position at the moment as a batting unit, and if Jonny does get the opportunity, I’m sure he’ll take it with both hands.

Q. Obviously, selections are fluid, but before the tournament, you did say that Jason Roy would play in every game regardless of how he did. What’s made you change your mind?
EOIN MORGAN: Who says I’ve changed my mind?

Q. Okay. What’s made you consider changing your mind?
EOIN MORGAN: You know, I back all my players. I see the best in them, and I believe in them a huge amount, and every one of the selectors does, every one of the back room staff does, and the players, obviously. Getting to this stage of the tournament, we need results, and if that means somebody misses out, it’s unfortunate, but for the team’s sake, we need to get results. We want to win this tournament.

Q. Eoin, obviously, there’s been a well-known policy that you keep faith with players even if they’re a little bit out of form. If there is a change tomorrow, would that signal a move away from that policy going forward?
EOIN MORGAN: No, absolutely not. We have kept the same policy for two years now. If somebody does get left out, they’re not going to be far from our plans. They’re certainly going to be in the same group of players gearing towards the 2019 World Cup.

Certainly, in white ball cricket, we have a collective group that I don’t see us venturing that far out of, maybe three, four more players, towards that World Cup because we need to get experience under the guys’ belts.

We’ve had a little bit of success, and we’ve played the right brand of cricket, but getting games under guys’ belts in order to win a World Cup is very important because, when you get to the latter stages of a World Cup, you need to have, say, 100 games under your belt in order to produce your best at that stage.

Q. And, obviously, it’s a conundrum when you make a change to a side, but do you have to bear in mind the player’s state of mind? How is Jason’s state of mind if there is a change? Would it perhaps do more damage to him going forward making a change at this stage of the competition?
EOIN MORGAN: You obviously consider all aspects of a player’s, as well as game. So, yeah, it is important, but ultimately, you know, at this stage of the tournament, it’s about the team. You know, collectively as a group, we’re very good together, and we have the support around us to, I suppose, back up any decision that’s made.

Q. Eoin, what do you make of the Pakistan bowling attack? Do you have any specific plans to counter the spin? The spinners have done really well in the tournament.
EOIN MORGAN: Pakistan are a very strong bowling lineup. I suppose they have variation, but certainly we do have plans against all of them. We’ve had plans for the last — since the last series that we played against them, last two series, home and away. So yeah.

Q. The way Pakistan made the comeback in this tournament after losing to India in the first match, then they defeated South Africa, the world number 1 team, then they defeated Sri Lanka yesterday. So how do you rate them as an opponent? Last time when Pakistan played you at this venue, Pakistan chased over 300 and won the match. Would this make an impact tomorrow?
EOIN MORGAN: I think the impact of that series was 4-1. Obviously, the result that came here was disappointing for us. I didn’t think we performed well that day. Pakistan outplayed us. Obviously, on their day, they can beat any team in the world, and you’ve just sort of touched on it, that they have the ability to beat the number 1 ranked side, and on their day, they’re very dangerous.

A lot of what we do well is about focusing on ourselves.

Q. Eoin, what have you made of Cardiff being one of the host venues, and are you happy to be at the semifinal given there are some reports there might be some empty seats tomorrow?
EOIN MORGAN: Cardiff’s always been a very good venue for us. The last game, we had great support. We had a full house, and everybody seems to get right behind us. So hopefully tomorrow — I think tomorrow is sold out as well. Where is the empty seats?

Q. It’s sold out, but it seems to be bought by Indian supporters. So they’re wondering if they’re going to turn up. That’s all.
EOIN MORGAN: Sell more.

Q. That’s what they’re trying to do.
EOIN MORGAN: All right.

Q. Eoin, it will be a used pitch tomorrow. They used each of these pitches once in the tournament. Would you have preferred a fresh pitch for the semifinal, or are you comfortable with a used wicket?
EOIN MORGAN: We’re comfortable with a used wicket, but the nature of this tournament is that the further the tournament goes on, the more you play on used pitches. We’ve come up against it before. We’ve raised this before the tournament started with the team, the challenges that we might have to come up against, and it is one of them.

I think the wicket that we played against New Zealand was as good as a used pitch. The grass was shaved off it, and it was quite challenging. But such is the nature of a hard tournament. You have to come up against different conditions.

Q. It’s been — Eoin, it’s been disappointing for Jonny up until now not to be picked. How has he reacted to that, not being in the team? Do you think he’ll be in a good frame of mind if he gets the nod tomorrow?
EOIN MORGAN: I think every time Jonny gets a chance, he’s been in a great frame of mind. He’s never been — no, I lied. Probably in two games he’s been in a position where he’s batted and enjoyed batting in that position, but every other time, he’s come in batting out of position. For me, I think that’s a challenge within itself, but he seems to take it in stride, and I wouldn’t see a problem if he came in tomorrow.

Q. Eoin, obviously, the batting has been quite down for two years now. But you’ve always maintained along the way the way you’re going to play and the way you’re going to attack is there are going to be horror shows along the way. We’re now in the knockout stage of the tournament. What is the message you’re now giving to the players to try to prevent either tightening up or going too hard either way?
EOIN MORGAN: I think it’s been reassuring that we’ve got to the semifinal by playing in our own way. The game here against New Zealand wasn’t exactly crash, bang, wallop. Looking back on it, we probably did get to a par score and felt as if we fell short, and beating a strong side like New Zealand with a par score is a huge strength.

So I think part of playing positive cricket, we’ve adapted well and played a lot smarter cricket in this tournament. So I think just continuing to play our own game and reinforcing that our own game works.

Q. Did you watch the game yesterday? If you did, what did you make of it?
EOIN MORGAN: I probably watched two hours of the first innings and about an hour and a half of the second innings and then I travelled out. It looked a good game. It looked quite competitive. The wicket looked good, a little bit slow. But, yeah, very competitive game.

Q. Do you think there’s potential vulnerability in the Pakistan top order that you can — your attack can exploit?
EOIN MORGAN: Who knows? We’ll find out tomorrow.

Q. Three wins out of three, the only team with 100 per cent record in the tournament. Two more wins, and England will win a global 50-over event for the first time. You must be hugely encouraged at the way the team is going.
EOIN MORGAN: I’m very encouraged by the way we’ve played so far. You know, part of playing the way we have before we came into the tournament was obviously trying to produce it in what is a very tough tournament and a tournament you need to start really well in, and I think we’ve started brilliantly. I hope we’ve not played our best cricket yet. I hope we play tomorrow and hopefully get through. But firmly focus on tomorrow.

Q. Eoin, chasing seems to be a big thing these days in modern one-day cricket, but the pitch here against New Zealand seemed to get a bit worse as the match went on. Would that affect your thinking tomorrow if you won the toss?
EOIN MORGAN: I’d rather lose the toss, I think, Paul. I’m not sure. Honestly not sure. Because it’s a used wicket, because it’s an early start draws different factors. If the weather’s as good as it’s supposed to be, yeah, I’m not sure. We’ll have to turn up tomorrow and see how dry the wicket is. 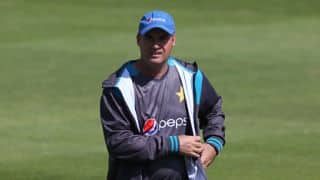