Bangladesh captain Mashrafe Mortaza has stated his side can face the future with renewed confidence even if they are denied a semi-final place at the ICC Champions Trophy 2017.

Q. From 33/4, did you believe your team could win that game?
MASHRAFE MORTAZA: To be honest at that time, it’s very difficult, I don’t. But once it goes 200, the partnership wants to go 200, to be honest I start to believe, because I knew that these two can make the difference, and they did a lot of times. But I never thought that they will go like more than 200 partnership. That was phenomenal.

Q. Have you ever seen either of them play better innings than that?
MASHRAFE MORTAZA: Yes, Mahmudullah played, obviously, that sort of innings in last World Cup, and Shakib, as well, I think. This is not the first time. But that sort of stage, I think it may count.

Q. You’re obviously hoping for England to do you a favor tomorrow. Will you be watching that match?
MASHRAFE MORTAZA: Look, yes, that will be nice, but we can’t just asking that Australia will lost that game. It will be nice. But I would like to say to both teams, best of luck. Whatever we could do, we did. That is the most important for us.

Q. Do you think that kind of performance, though, deserves to go into the semifinals? It’s the kind of performance that many people would suggest deserved it.
MASHRAFE MORTAZA: I think that sort of performance, a team like us, we have improved a lot. I’m not sure that we move, we should go to the semis or not, but obviously like to. Obviously if we go there, I hope that we will play more better cricket than what we played the last three match. I think we have to wait till tomorrow and what happens.

Q. Again, you said yesterday when we asked you about Tamim and the runs he had scored, you picked out the other players who you knew could score runs. How pleasing is it that it was two of those players that achieved the victory, as opposed to Tamim?
MASHRAFE MORTAZA: Yeah, look, we knew every day Tamim can’t get a score. Exactly what happened today. And we knew that we have some extraordinary players like Mushfiqur, Soumya, Imrul was there last two matches. I knew that Shakib and Mahmudullah can make a difference. You have seen that Mosaddek bowl three overs only, and change the game, and obviously his batting, we knew — he’s a very youngster and he also can bat very well. We have players, we knew that, and 266, we knew that it is gettable. But after 33/4, it becomes very hard.

Q. Yesterday you said that you would have to do something extraordinary to beat New Zealand. Now you’re saying you don’t know whether you deserve to be in the semifinal. Are you intentionally just playing down the hopes to keep everything, emotions in control for your team?
MASHRAFE MORTAZA: No, I think you get me wrong. I said I don’t want to … that’s not what I want to mean. I said, I don’t know what’s going to be happening tomorrow. Yes, deserve or not, that is a different issue. I can’t just tell you that I deserve, and it’s not going to be happen. Things that we get a chance to win the matches, we win. Now we have to wait. But I can’t say, yes, after winning one match, yes, we deserve it. That’s not going to happen.

Q. You’ve shown a lot of improvement in recent years. How important was this to take the next step up?
MASHRAFE MORTAZA: Obviously I just keep telling that last three years, we are improving a lot. But that sort of stays, or that sort of wicket, all it is, asking question. But I think these sort of performances really helps us to move forward, especially if you look at we have still South Africa fixtures coming up, and also 2019 World Cup is going to happen. I think that will really boost up the team. 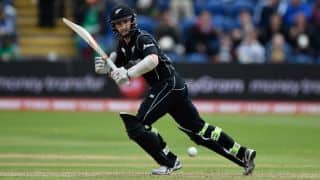 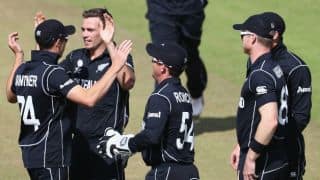