Pakistan captain Sarfraz Ahmed insisted he always believed his side could turn their fortunes around after they reached the Champions Trophy final.

Q. Sarfraz, congratulations. I wanted to ask about Hassan Ali, Obviously bowled very well. He appeared to be hobbling with a bit of an injury. Did he have an injury during the match or coming into the game.
SARFRAZ AHMED: No, I think he have a little bit shin problem, but he’s okay and bowling extremely well for us.

Q. Sarfraz, congratulations, that was a great win. How did the pitch play?
SARFRAZ AHMED: I think the pitch was very good. I think both team — it was good for both teams. I think we play very good. That’s why we win today.

Q. After you won the totals and put them, what was your — did you expect such a total you could bowl them out? And what did you tell your batsmen to go about this target?
SARFRAZ AHMED: Actually, I’m not expecting we bowl them out 210, but we expected today — yesterday we came here, and we see that — we had a meeting, and we thought, if we won the toss, elected to bowl first. And if we restrict them 260, 270 goals, that’s why target is easy for us.

Q. After that defeat by India, what did you say to the team to inspire them to play this well, or did the coach get you together and say something?
SARFRAZ AHMED: I think, we just talked about — after the India match, we just motivated the guys. Don’t worry about the India match. This is gone. We have two matches. If it we play good cricket, definitely we will win this tournament. Now we are in the finals.

Q. Sarfraz, it’s been a lot of your younger players who have played a starring role, Hassan with the ball, Fakhar opening the batting. How pleasing is that for you, as a captain trying to build a new team, that it’s been your younger players who have helped you so much?
SARFRAZ AHMED: I’m very happy about my youngsters performing, especially Hassan day by day improving, Shadab day by day improving, and now today Fakhar Zaman, he’s playing in third match, and now he’s batting just like a champion batsman. So I’m really happy about his performance. Hopefully, he will do well InShaAllah in futures as well.

Q. Sarfraz, is that the best game that you’ve played with in Pakistan? Is that the best they’ve played with in any of the ODIs that you’ve been involved in?
SARFRAZ AHMED: I think it was — I think all three games is the best game when I was the captain. I think it was the best game. That’s why, because, you know, we are in the semi-finals. No one recognised us. So I was very happy for my team performance, and all the credit goes to my team management and my players.

Q. How worried are you about Amir and his back? Mohammad Amir? Can he get back on the team after that performance?
SARFRAZ AHMED: I think he has a little bit of back spasm. Hopefully, he will recover for the finals.

Q. You bowled very well without him. You still need him?
SARFRAZ AHMED: Obviously, he’s our main bowler. He’s our best strike bowler. Hopefully, he will recover InShaAllah.

Q. Imad Wasim went off. Is there any news on him?
SARFRAZ AHMED: No, he’s a little bit with a calf injury. I think he was okay. 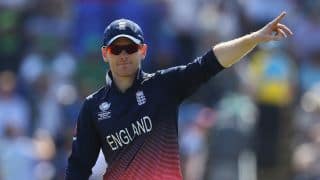 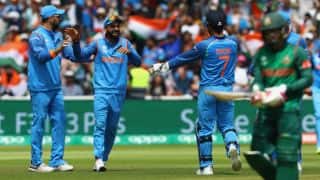