Joe Root, the hero for England in the third day of the first Test against India at Trent Bridge said the Test match is not yet over and they will give India a tough fight.  Root did not think the England batting show should raise concerns yet. He said, “It’s not ideal, obviously. There are some days the top-order have a perfect day and the top three get hundreds and this was not one of them. It is a team game and we have to ensure batters contribute more.”

The tea interval helped. “When you go through a session like that when you have lost a lot of wickets it is good to regroup, and it helped to break the momentum of India. We could come out and put pressure on them.” He was not really surprised with the effort of the tail. “Not really, I think a lot of those guys don’t think of themselves only as bowlers. The way Stuart [Stuart Broad] came out and struck the ball really helped me play the way I played.”

When asked about the possibility of England winning this Test, Root said that there was always a chance. “You never know, if we can work away on the lead and put the pressure back on them anything is possible.” Asked about the reverse sweep with which Anderson started his innings, Root laughed, “Well, he played exceptionally well and coming in at that situation and trying to do that shows how much he works on his batting and how much he enjoys it.” Matt Prior’s dismissal was disappointing, but Root said, “When there is no DRS there is nothing we can do about it.” 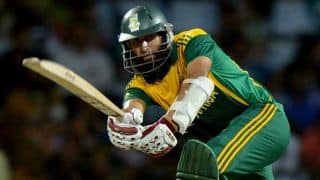