Australian all-rounder Moises Henriques had a stellar debut for Australia in the first Test against India at Chennai.

Even though Australia lost the match by eight wickets, Henriques's performance was a silver lining for the visitors ahead of the second Test at Hyderabad.

Henriques scored 68 and 81 not out with the bat and took one wicket with the ball in Chennai.

The video shows Mitchell Starc talking to Henriques in the team hotel at Hyderabad leading up to the second Test.

Henriques reveals how his name is pronounced correctly and talks of playing on India's spinning surfaces. 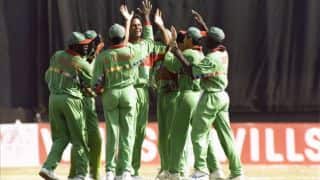