Before the start of the first Test between India and Australia at Adelaide, the Australian players paid tribute to Phillip Hughes who passed away on December 27 after he was struck by a bouncer. The entire Australian squad including their coaching staff applauded for 63 seconds as Hughes was 63 not out when he was hit by that fatal bouncer. Even the crowd joined the entire team in paying tribute to Hughes.

The entire Australian team had the number ‘408’ printed below the crest of their shirts since that was Hughes’ number. Every player had tears in their eyes as they remembered their mate. Hughers was named the 13th man for the this test match. Players like David Warner, Steve Smith and Michael Clarke looked to the heavens and remembered Hughes when each of them reached a milestone in the match. 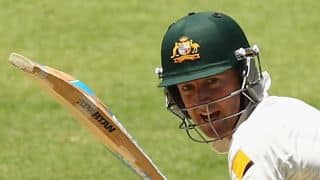 India vs Australia 1st Test at Adelaide: David Warner’s blitz, 63 not outs, India’s late burst and other highlights of Day 1