The scoring rate was a shade better than the overnight effort, which fetched them 215/2, and India declared at 443/7 before Australia responded with 8/0 in six overs.

Melbourne: The redoubtable Cheteshwar Pujara produced yet another classy hundred and combined with captain Virat Kohli (82) to put India in command on the second day of the third Test against Australia on Thursday.

The scoring rate was a shade better than the overnight effort, which fetched them 215/2, and India declared at 443/7 before Australia responded with 8/0 in six overs.

Pujara was the dominant figure with his second century of the series, a dogged but faultless 106 off 319 balls, which ensured that India consolidated the good start. It was though his slowest hundred in Test cricket yet.

Kohli, who contributed a significant 82 off 204 balls, made a surprising declaration in the 70th over with Rohit Sharma at 63 not out off 114 balls. Kohli’s knock helped him to a personal milestone as he surpassed Rahul Dravid (1137) for most number of runs in a calendar year in overseas Tests.

Rohit’s knock, included five fours, while Pat Cummins was the pick of the Australian bowlers, taking 3/72 in a back-breaking effort of 34 overs.

At stumps, openers Aaron Finch and Marcus Harris were unbeaten on 3 and 5 respectively. 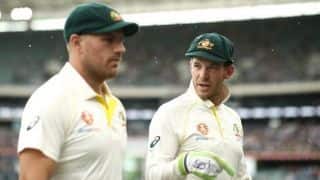