India sealed a comprehensive 137-run win on the final day of the third Test against Australia at the Melbourne Cricket Ground (MCG) on Sunday to take a 2-1 lead in the Border Gavaskar Trophy series.

The first session was washed out due to overnight rain, but inclement weather didn t dampen the spirit of the Indian bowlers, who needed just 27 deliveries to clean up the Aussie tail.

Japrit Bumrah, who claimed a career-best 6/33 in the first innings, broke a stubborn ninth-wicket stand between Pat Cummins and Nathan Lyon after he accounted for for the wicket of Cummins, who departed to a standing ovation from the MCG crowd having made 63 off 114 balls. Ishant Sharma then saw the back of Lyon in the next over to trigger wild celebrations in the Indian camp. 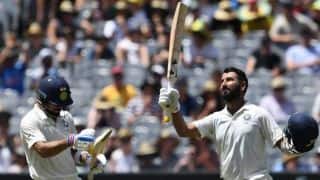 Pujara has been flexible in altering his game plan: Kohli