Australia pacer says that India captain Virat Kohli, who scored his 40th ODI ton in Nagpur to set up home team s win, turned out to be the difference between the two sides in the second ODI

Australian speedster Pat Cummins said that Virat Kohli s hundred (116 runs) in the second ODI in Nagpur was the difference between the two sides and led India to an eight-run win on Tuesday in Nagpur against the Aaron Finch-led visitors.

The Indian skipper notched up his 40th ODI hundred before the bowlers manged to restrict Australia to 242 in the chase of 251. The win also helped India take 2-0 lead in the five-match ODI series.

India, who were put in to bat, were in a spot of bother losing three wickets with just seventy five runs on board. Kohli was then joined by Vijay Shankar and the two stitched an 81-run partnership before Vijay was run-out in an unfortunate manner. India lost two more wickets in a quick succession as Adam Zampa removed Kedar Jadhav and MS Dhoni in the 33rd over to reduce India to 171/6.

Ravindra Jadeja (21 off 41 balls) overcame a nervous start to put on 67 with Kohli, who maintained a strike-rate above 90 despite the wickets and sluggish surface.

Kohli, meanwhile, brought up his second ODI hundred at the Vidarbha Cricket Association Stadium in Nagpur to guide India to a respectable total of 250.

He should have been run out on 87 except that Maxwell missed the stumps. The 100 came off 107 balls with a rasping boundary through point.

Kohli was out for 116 off 120 balls in the 48th over when he swung Cummins straight to deep midwicket, who then bowled Kuldeep Yadav to claim his fourth wicket. The end came when Coulter-Nile bowled Jasprit Bumrah for zero. 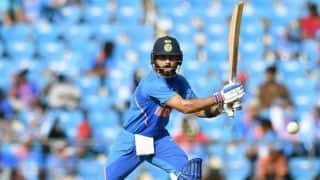