We trust our batters to perform their role: Alex Carey

We trust our batters to perform their role: Alex Carey

Carey was not surprised how the batters tackled India's formidable spin duo of Yuzvendra Chahal and Kuldeep Yadav.

Bolstered by the success of back-to-back victories, Australia vice-captain Alex Carey is confident tourists will enter the ICC World Cup 2019 with a squad good enough to play like defending champions. The five-match ODI series against India is poised at 2-2 with the decider at Feroz Shah Kotla in New Delhi on Wednesday. (VIDEO: Vijay Shankar is a huge positive for the team: Bharat Arun)

“As a player in the Australian cricket side we have been working hard in the last 12-18 months. Some success has started to come our way. We are really confident moving with the squad we take to the World Cup,” Clarey said.

The wicketkeeper-batsman was not surprised how the batters tackled India’s formidable spin duo of Yuzvendra Chahal and Kuldeep Yadav.

“There has probably been a fair bit of media (analysis) about Australia playing against spin in the past. We have worked really hard on playing spin bowling in the nets over 12-18 months. I guess to see some reward, again it’s no surprise, but the guys are doing so much hard work off the field,” said Carey. (VIDEO: Australian team meets India legend Bishan Singh Bedi)

He said the strength of the Australian team at the moment is that they have plenty of options.

“We take a lot of confidence that we trust the batters to perform their role. When Ashton did that the other night he did really well. They (Indians) are world class bowlers and I am sure they want to bounce back and it’s up to our batters to have a game plan to negate that. We trust the players to perform their role and take on the best bowlers in the world and do a good job,” explained Carey. 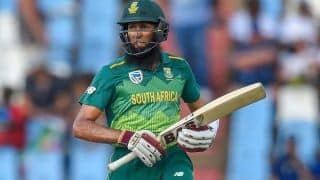