Despite a lead of 292, Kohli opted to bat again and watched as India slumped to 44/5.

Despite securing a whopping lead of 292 after Jasprit Bumrah took 6/33 to bowl out Australia for 151 in 66.5 overs on day three at the MCG, Virat Kohli chose not to enforce the follow-on on Friday.

In 14.2 overs, Kohli found himself at the crease with the task of adding to India s lead after Pat Cummins grabbed two wickets in three balls, including that of Cheteshwar Pujara for 0. Kohli lasted four balls before Cummins had him fending to gully for a duck as well, meaning that India had surrendered three wickets without a run scored in 13 balls. Cummins, his tail up with figures of 3-2-2-3, then had Ajinkya Rahane caught down the leg side to leave India 32/4 in 16.1 overs. It made you wonder what India s bowlers could have done a feeble Australian top order had Kohli not opted to enforce the follow-on. (FULL SCORECARD: INDIA vs AUSTRALIA, MCG TEST)

Cummins missed a hat-trick, but psychological incisions were made. Hanuma Vihari, already pushed into the unfamiliar role of opener, had another low score to his name after Cummins bounced him out with a nasty delivery that rose on him. Rahane, who before this Test spoke of his chance of getting 200 at the MCG made 1 to follow 34 in the first innings.

When Rohit Sharma feebly poked Josh Hazlewood to the sole slip, India had lost half their side inside 23 overs. Mayank Agarwal’s unbeaten 28 from 79 balls is a solid effort amid the wreckage.

India still have a massive lead, thanks to some exemplary bowling from Bumrah who claimed Harris with a well-directed bouncer in the morning and then foxed Shaun Marsh and Travis Head with clever yorkers either side of lunch, before returning after tea to sniff out three wickets in 11 balls for the cost of one run. (ALSO READ: Bumrah breaks 39-year-old record, becomes highest wicket-taker on debut) Australia s problems began in the fifth over of the day when Aaron Finch (8) was excellently held at short midwicket by Agarwal, who fell to his left to catch a whip off Ishant Sharma. Soon after, Ishant held an easy catch at long leg as Harris (22) was hurried into a mistimed pull shot by Bumrah. Australia had lost their openers in the span of 18 balls.

From the outset, Bumrah operated on a full and threatening length while noticeably quicker than Ishant and Mohammed Shami. The surprise delivery to Harris was thus special, for it came as a jolt after a series of teasing deliveries. Hitting good speeds and getting a hint of wobble off the seam, Bumrah strangled the batsmen in a top spell and then returned before lunch to deal a huge blow.

Just after the first drinks break, Ravindra Jadeja had Usman Khawaja (21) stabbing uneasily at a clever slower delivery and inside-edging to Agarwal at short leg. Shaun Marsh was kept scoreless for 16 deliveries, had four catchers crowd the bat and held out against Jadeja, who fired in darts to keep the fielders interested. Head survived two lbw shouts and one appeal each for a stumping and close-in catch. Jadeja targeted the rough outside both left-handers’ feet and landed them with consistency, while Bumrah returned for a burst before lunch and tempted Shaun Marsh and Head outside off stump.

After a series of leaves in the final over before lunch, Shaun Marsh was pinged right in front of the stumps by a terrific slower ball, full and shaping in, that dipped and totally foxed him. A tremendous session for India capped with a tremendous delivery. In Bumrah s fifth over of his second spell either side of lunch, Head was beaten for pace by a lovely wide yorker, not even bothered to look back at the splayed stumps.

Mitchell Marsh, whom Australia s coach Justin Langer identified as vital to this match for his ability to play spin, made 9 from 36 balls before he charged Jadeja and and was caught a slip off an inside edge. That was his 18th dismissal to spin; Marsh s average since he got a superb 96 at Durban in March has dipped to 10.27.

As the second hour ticked over, Vihari was given the ball. With his first ball he found the edge of Cummins bat but Rishabh Pant didn t hold on. Cummins made 17 from 48 balls until, moments before tea, Shami bowled him with a peach. Post tea, Bumrah finished the innings on 151 in a spell that read 1.5-0-1-3 and gave him a Test best of 6/33. Paine (22) edged to Pant and Nathan Lyon and Hazlewood were taken out for ducks in the last over of the innings.

Not long after, India also collapsed in similar manner to a charged-up Cummins. 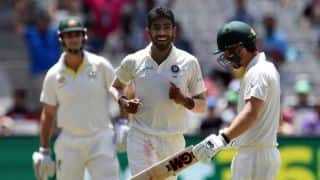