Wriddhiman was ruled out of the England Test series due to tendonitis (thigh muscle injury) and his replacement Parthiv Patel did well in whatever opportunities he got.

India wicketkeeper-batsman Wriddhiman Saha believes he was destined to score a century against Bangladesh in the one-off Test at Hyderabad. Saha was unbeaten on 106 along with Ravindra Jadeja (60*) when India declared their innings on 687 for 6. Saha made his comeback in the Test squad after scoring an impressive double-hundred in the Irani Trophy helping Rest of India defeat Gujarat. Prior to this, he was ruled out of the last couple of games against England due to injury which earned Parthiv Patel a chance in the squad. Parthiv too had impressed in his limited opportunity he got against England. FULL CRICKET SCORECARD: India vs Bangladesh, one-off Test at Hyderabad

Saha also hailed the Indian team management’s clear cut policy of giving the well performing injured players a chance to make a comeback into the playing XI once they are fully fit as a “huge positive”, saying that it certainly has an effect on their performance. Wriddhiman was ruled out of the England Test series due to tendonitis (thigh muscle injury) and his replacement Parthiv Patel did well in whatever opportunities he got. But the team management had always made it clear that Bengal lad is the No. 1 wicketkeeper for India and takes his place whenever he is fit.

“It’s a great plus for the players (knowing their status). Because after an injury hiatus, when someone makes a comeback, if he is clearly told that “as and when you recover, you will be back in the team,” the individual gets more motivated and that reflects in his performance,” unassuming Wriddhiman said after his second hundred in comeback Test.

Even though he is undisputedly India’s No. 1 keeper, Wriddhiman complimented Parthiv for his glovework but said that one needs to accept the selector’s decision.

“When I got injured, Parthiv came in and performed. Whenever he has got chances, he has performed. But may be, after my double hundred in the Irani Cup, selectors took a decision, which everybody needs to accept,” said the 32-year-old from Siliguri.

Talking about Irani Trophy double hundred, Wriddhiman said that while Bangladesh attack being an “international one” was better than Gujarat’s, but his approach in both innings was same — to remain positive and attack.

“This attack (Bangladesh) was more challenging than Gujarat attack as this one is an international attack. There is some difference but the approach was same like my second innings double hundred during Irani Cup. Initially, I got a reprieve but after that I carried on with positive intent. My aim was to bat as long as possible and contribute as much as possible for the team.”

His partnership with skipper Virat Kohli wasn’t a big one but he was at the other end when the skipper completed his double hundred.

“Whoever bats with Virat, he backs that batsman. He would always suggest us to play our natural game. He tells us “If you feel you can hit the ball, go for it. Not that if you are new to the crease you have to defend”. That’s why I tried playing that shot (referring to the missed stumping chance by Mushfiqur Rahim) but Virat said that it’s not a problem, if you again get a chance, hit it. He always gives you confidence which is a huge plus,” said Wriddhiman.

He termed his match-winning twin half-centuries against New Zealand at Kolkata as better effort than both his Test hundreds.

“I value the two half-centuries against New Zealand more because the team needed my contribution, needed partnerships and quality of (New Zealand) bowling was also good. We needed to set a target of around 300 and taking all these factors into account, those two knocks were vital.” 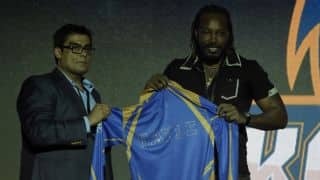