Ravichandran Ashwin is pinning his hopes on the second new ball to give India breakthroughs on the fourth day of the second Test against Sri Lanka.

With the pitch showing no signs of aiding the bowlers, off-spinner Ravichandran Ashwin is pinning his hopes on the second new ball to give India breakthroughs on the fourth day of the second Test against Sri Lanka. Replying to India’s massive first innings total of 622 for 9 declared, Sri Lanka were bowled out for a paltry 183 with as many as as eight wickets falling in a single session. But after the hosts were enforced a follow on, Dimuth Karunaratne (92 not out) and Kusal Mendis (110) added 191 for the second wicket, even as India could get only two wickets in the next two sessions.

“I think this wicket will get slower and slower. It is not going to be easy work tomorrow for sure. We will have to be really disciplined. I thought we gave a few runs more than ideally we should have given today. Tomorrow we can probably try and squeeze them out and try and nip a few wickets up early,” said Ashwin at the press conference after the third day’s play.

“Wicket is slowing down at a very quick pace. Edges aren’t carrying. So that means we will have to stick our guns out and try to prise a few wickets out.

“The second new ball, therefore, becomes important. But as I said they got a great partnership but the guys coming in will have to start from scratch. There is going to be an equal challenge on both sides,” he added.

“I just think Test teams are allowed to bat well in a few sessions. They did bat well. We beat the bat pretty often even in the sessions we didn’t get wickets. I thought they batted really well.

“Karunaratne really complimented Mendis, defended beautifully, and Mendis played a few extra shots that Karunaratne obviously didn’t play. It came off for them.

Credit to them, they batted really, really well,” he said.

The spinner, however, felt that the Indian bowlers did not do “too much wrong”.

“We tried reverse swing and bowled cutters in the end.

Hardik Pandya got the wicket with a cutter. We beat the bat a few times more than we should have for the nicks we got.

Hopefully we will try and nick them off tomorrow.”

Ashwin, who picked up his 26th five-wicket haul in Test cricket, said as the ball got older it fizzled out.

“It had a bit of venom in the morning, in the first session. As the ball got older and we bowled the second time around, it was kind of fizzling out and the edges weren’t carrying that much to the fielders. We beat the bat a lot.

“I thought Mendis batted beautifully. He put Jadeja off his length very quickly. He kept on sweeping him, and he was lucky, he got away with it, but credit to him.

Ashwin defended the team’s decision to enforce a follow- on, saying, “Most often than not we have based it (follow-on decision) on how fresh or how tired the bowlers are. We did get them out in under two sessions so we thought it was the right time to enforce the follow-on.

“We also felt the wicket will keep on slowing down so it is not going to be easy work as the game goes deeper into the fourth or the fifth day. You might see the ball spitting and all that but that is because of a few spots in front of the wicket. But it is not really that vicious for the ball to take the edge and go to the slip fielders.

“If you play with soft hands, it is very difficult to get them out,” he added.

Ashwin felt the Lankan batsmen deployed the sweep to good effect against the two spinners.

“For me, the best option was to try and vary the pace, and try and find the top edge, because as it is I’m tall. To try and get underneath the bat is a bit of a no-no as far as I’m concerned because you start darting the ball in and you start bowling faster. For me, I did try a lot, I went wider, went straighter,” he said.

“I didn’t give him a lot of boundaries in terms of sweep, which he did yesterday. So that was my plan, basically try and get him play a sweep and one run is a good trade off for a top edge, that’s how I look at it.

“As a batsman who’s sweeping against me, I don’t really mind it, it gives me a good chance. But having seen him for the first time, probably the next time I will try and come in with a different plan,” insisted Ashwin. 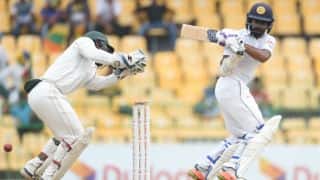