A win for India would see the hosts take a 2-0 lead, while West Indies will want to stretch that tie to a win.

After scampering away to an eight-wicket victory in the first ODI at Guwahati, India were made to settle for a draw in a thrilling tie at Vizag which has now raised the stakes for an equally exciting third ODI at Pune on Saturday. India captain Virat Kohli s gargantuan innings of 157* in Vizag where he also became the quickest to reach 10,000 ODI runs, powered the hosts to 321/6.

Despite Kohli s herculean effort, West Indies were able to level the scores, courtesy Shai Hope s unbeaten 134-ball 123 and in-form batsman Shimron Hetmyer s 94, the centurion in the previous match in Guwahati. West Indies were helped with some pretty ordinary bowling from pacers Umesh Yadav and Mohammed Shami, who were pretty wayward in their approach.

For the remaining three ODIs, the premier pace bowling duo of Jasprit Bumrah and Bhuvneshwar Kumar, who were rested from the Test series, made their way back in the side. The batting top order looks to remain the same, with Ambati Rayudu repaying faith in his skipper of fulfilling the No. 4 batting slot.

Rayudu and Kohli were involved in a 139-run partnership in Vizag. Rayudu ended up scoring 73 after he was cleaned up by Ashley Nurse. It will be interesting to see if the think tank gives young Khaleel Ahmed, who claimed one wicket in Guwahati.

A win for India would see the hosts take a 2-0 lead, while West Indies will want to stretch that tie to a win. They have come so far and will be itching to cross the finish line. A cracker awaits! 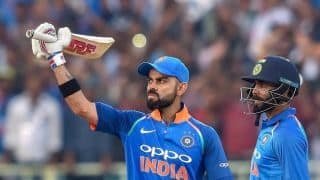