After Prithvi Shaw s dazzling 134 headlined Day 1, it was time for skipper Virat Kohli to take centerstage with his 24th Test hundred

After Prithvi Shaw s dazzling 134 headlined Day 1, it was time for skipper Virat Kohli to take centerstage with his 24th Test hundred

The Indian bowlers then got in to the act to leave West Indies high and dry at 94/6, trailing India by 555

Starting the day at 364/4, Kohli hardly broke a sweat as he moved from 72 to his 24th Test hundred

The hundred came with a glance off the pads for four, his second versus West Indies and 17th as skipper, becoming, after the legendary Sir Don Bradman, the fastest batsman to 24 hundreds in the format

During the knock Kohli become the first Indian batsman to score 1,000 Test runs in a calendar year for three years in succession

The declaration came once Jadeja brought up his first Test century, off 143 balls with a sprinted single in front of his home fans. India has scored a mammoth 649/9

Having been run ragged by India, West Indies quickly fell to 7/2 with Mohammed Shami on fire with the new ball

Jadeja wasn t done harassing West Indies. He ran out Shemron Hetmyer and moments later had Sunil Ambris edging to slip with his first ball of the match 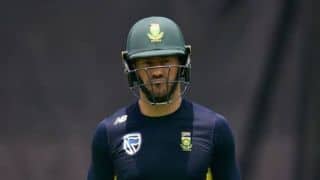 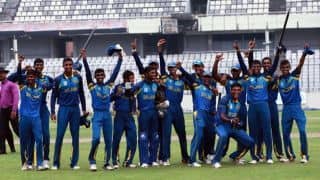 Asia Cup U-19: Sri Lanka set up summit clash with India after beating Afghanistan in semis