Taylor had anchored Zimbabwe’s 287 all out with a punishing 110-ball 138 in what was his last international after signing a deal with English county Nottinghamshire. LIVE BLOG: India vs Zimbabwe

The skipper smashed 15 boundaries and five towering sixes in his second successive century after making 121 against Ireland, although Zimbabwe had already been eliminated from a tournament in which they lost five of six games. READ: India have played brilliant cricket in ICC Cricket World Cup 2015: Suresh Raina

Raina was dropped twice — on 47 and 71 — as he and skipper MS Dhoni, who made an undefeated 85, put on a match-winning and unbroken fifth-wicket partnership of 196 after India had been in trouble at 92 for four. IND vs ZIM: Suresh Raina scores 5th ODI century

India can look ahead to a quarter-final in Melbourne against Bangladesh on March 1. READ: Brendan Taylor, thank you for the memories! 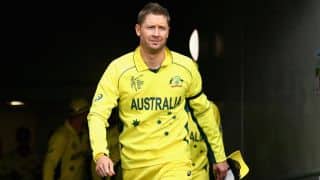 Australia needs to be at its best hereon in ICC Cricket World Cup 2015, feels Michael Clarke