A video feature on England‘s new wicketkeeper Jos Buttler as the team prepares for the ICC Cricket World Cup 2015. England are currently involved in a triangular series in Australia, also involving India.

Meanwhile, a brilliant all-round performance by England helped them thrash India by nine wickets and in the process gain a bonus point in the third match of the Jos ButtlerOne-Day International (ODI) tri-series, also involving Australia, at The Gabba, IANS reported.

Pacers James Anderson and Steven Finn played a starring role as England bowled India out for a paltry 153 in 39.3 overs and an unbeaten 131-run partnership between Ian Bell (88 not out) and James Taylor (56 not out) saw them reach the target with 22.3 overs to spare.

Stuart Binny removed opener Moeen Ali in the third over to provide the Indians with a ray of hope but that was all quashed by a clinical innings from Bell and Taylor. The Indian bowlers looked toothless and were taken to the cleaners by the English duo, who looked in complete control throughout. 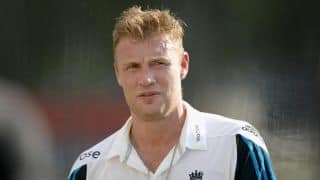