Josh Hazlewood: Not thinking about The Ashes at all

Josh Hazlewood: Not thinking about The Ashes at all

Josh Hazlewood was the pick of the bowlers in the series for Australia.

Australia fast bowler Josh Hazlewood, who has been in excellent form in the Test series against West Indies says that he and his teammates are not thinking about The Ashes. Australia will take on England in a traditional five-Test Ashes series in July 2015. Hazlewood has been performing well of late and will be in contention to be picked for The Ashes. READ: Josh Hazlewood records career-best figures to skittle West Indies out for 220 on Day 3 of 2nd Test at Jamaica

Hazlewood picked up five wickets in the first innings of second Test against West Indies. He followed it up with another two wickets in the second innings and with this performance has put himself in firm contention of selection. Australia managed to win the two-match series 2-0 and will go to England for The Ashes full of confidence. READ: Australia rout West Indies by 277 runs in 2nd Test at Jamaica

West Indies, on the other hand, did not give much of a fight to Australia and will not be happy especially after putting up a good performance against England in the previous home series. 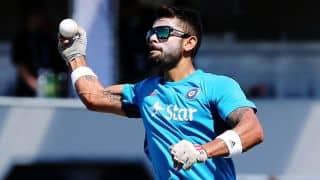 Who scored the first double century in World Cup history?