Kane Williamson picks his moments when he wants to attack, he's a world-class captain: Ross Taylor

Kane Williamson picks his moments when he wants to attack, he's a world-class captain: Ross Taylor

A win over England will seal New Zealand's spot in the semifinals. Even if they lose and Pakistan beat Bangladesh, New Zealand will be through on the basis of better NRR.

Ross Taylor, who has played under both captains, shed light on the contrasting leadership styles of the two players, pointing out that while McCullum was an extreme, Williamson has his own style.

I think Kane is a fantastic world-class batsman and a world-class captain, you know. You don t have to look far, the last couple of matches. There s some pundits out there saying he was a great captain. We lose a couple of games and he is a bad captain. He is still a great captain, leads from the front and the team respect him and I love playing under him, Taylor said.

I d love as a team to take a little bit of pressure off him and score some runs and not let him do everything. But, you know, in terms of Kane, he is a great captain to play under and looking forward to him hopefully continuing that good toss record that he s had over the last little while as well. 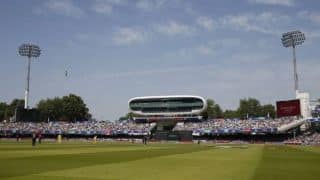