Laxmi Ratan Shukla, the Bengal skipped was picked by the Delhi Daredevils at the IPL 2014 auction.

Laxmi Ratan Shukla, the Bengal skipped was picked by the Delhi Daredevils at the Indian Premier League (IPL) 2014 auction in Bangalore. Shukla had played for the Kolkata Knight Riders for the first six seasons and now moves to another franchise this time. Kolkata is his hometown, but now Shukla moves to Delhi.

Shukla is a useful all-rounder who can contribute with both bat and ball. He has been very successful for Bengal in the domestic competitions and T20 teams need such players in their roster. He had played three One-Day Internationals (ODIs) for India in 1999, but then failed to appear in any further international games. 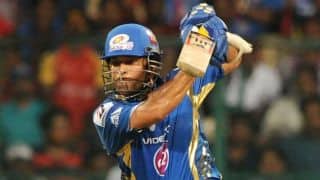