A clinical India thrashed a listless West Indies side by 10 wickets inside three days; Prithvi Shaw and Umesh Yadav major positives for hosts.

Pant missed out on a well-deserved hundred for the second successive time and departed after scoring 92, the same score he was out for at Rajkot. Ravichandran Ashwin then chipped in with a useful 35 off 83 balls. He was well supported by the injured Shardul Thakur.

Ashwin was cleaned up by Shannon Gabriel as West Indies bowled out India for 367, with a 56-run lead at the stroke of lunch.

The pick of the West Indies bowlers was Holder, who claimed five wickets to become the first West Indies pacer in 24 years to bag a Test 5-wicket haul in India.

India bounced back strong in the second innings with Umesh Yadav and Ashwin sending both West Indies openers, Kraigg Brathwaite and Kieron Powell for duck inside the first four overs.

Kuldeep Yadav then was responsible to send Shimron Hetmyer after he scored just 17 as West Indies slipped to 45/3. Ravindra Jadeja got the better of Shai Hope in the very next over after he edged it to Rahane in the slip cordon.

Umesh Yadav, who was at his furious best, clean bowled both Roston Chase and Shane Dowrich. Post-tea, Jadeja struck twice to remove Holder, who scored 19 and Sunil Ambris, who scored 38.

Umesh then claimed the last West Indies wicket of Gabriel to register his maiden 10-wicket haul as the visitors were bowled out for 127 with India needing 72 runs to win.

India openers Prithvi Shaw and KL Rahul hardly broke a sweat to chase the target as the hosts cruised to a comprehensive 10-wicket win to seal the two-match series 2-0 on Day Three. 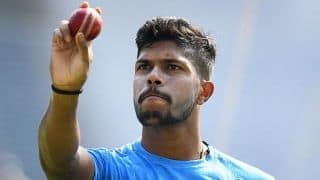