Michael Clarke: Let's not get carried away

Michael Clarke: Let's not get carried away

Australian skipper Michael Clarke has urged fans to not get carried away with a win inside three days against West Indies in 1st Test at Dominica.

Michael Clarke has urged Australian fans all around the world to not get carried away with a win inside three days against West Indies. Clarke called it a pleasing victory but it was just the start. Australia completed a comprehensive nine-wicket victory just before stumps on the third day of the first Test against the West Indies at the Windsor Park Stadium in Dominica on Friday after the home side’s second innings resistance crumbled. Read Australia win by 9 wickets to draw first blood against West Indies in 1st Test at Dominica

Going into the second Test at Jamaica, Clarke said that shot selection was an area they could improve on. He credited Adam Voges for showing tremendous resolve and patience to get the big runs and that was something they all could learn from him. On being asked about Fawad Ahmed he says that the bowler is working hard and Ahmed understands what the teams needs.

On Chris Rogers, Clarke said he has not had talks with the doctors but he has seen him having a couple of nets and the management will take the final call on him before the second Test. Read: Denesh Ramdin laments West Indies’ shortcomings after loss in 1st Test to Australia 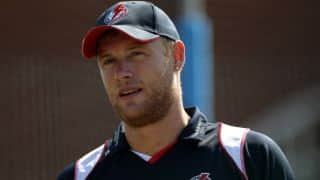