A video of Australian all-rounder Mitchell Marsh, who answers quite a few interesting questions from fans.

A video of Australian all-rounder Mitchell Marsh, who answers quite a few interesting questions from fans on social media. The star all-rounder has revealed that it as tough for him to choose cricket over the Australian Football League (AFL) when he was growing up.

Meanwhile, West Indies slumped to 143 for eight in reply to Australia’s first innings total of 399 following an eventful second day of the second and final Test, highlighted by Steve Smith missing out on a double-century by just one run, AFP reported.

In the second half of the day though it was Nathan Lyon’s off-spin that brought him three wickets as first-change bowler, pushing him ahead of Hugh Trumble as Australia’s most successful Test off-spinner ever with 144 victims.

“This was a much more helpful wicket than (the first Test) in Dominica,” said Lyon. “You just had to bowl in the right areas and be patient. There was always something likely to happen.” 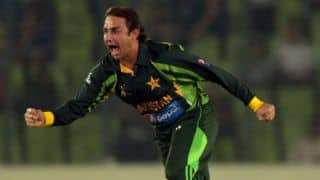