A video of Alastair Cook and James Anderson speaking to the media after the end of the first Ashes Test at Trent Bridge on Sunday.

England won the first Test by 14 runs, after the last wicket of Brad Haddin was given in what can be called a controversial DRS decision.

Cook said, “We heard the edge, that’s why we reviewed it," Cook said. "But we always take a little bit of time discussing it. It’s a bit of a team tactic because obviously emotion can kick in and wanting any wicket at any time means you think it could be out. But you’ve got to give yourself five seconds thinking time.

“I think it [DRS] is pretty fair as there is a bit of skill in using it. You have to have little human element. Tactically we have been quite poor with DRS in the past. In this game we’ve been a bit better."

Cook furthermore praised Anderson for his contribution despite having some cramp problems before the lunch.

“Those were very subcontinental conditions and he was outstanding. He swings it both ways on an immaculate length and makes it hard to score. You do worry about his workload in one sense, but out in the middle that is kind of irrelevant. It’s a job for our backroom staff and us as a team to make sure we recover well from today because back to back Test matches are hard physically.” 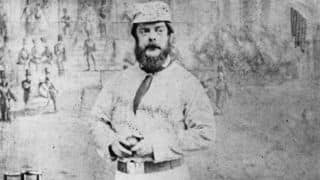