Ben Cutting: Happy with the way I bowled against India A on Day 1

Ben Cutting: Happy with the way I bowled against India A on Day 1
By CricketCountry Staff

Ben Cutting, the Australian all-rounder is speaking in this video to the media after day one of the first game between India A and Australia A. India A scored 304 for six with Maoj Tiwary scoring 83. Naman Ojha is unbeaten on 82. Cutting took two wickets on the day and bowled quite a few short balls to the Indians. Though Cutting went for over four an over, he did bowl very well to get the two wickets. He dismissed KL Rahul and Jiwanjot Singh on the day. In this video he said that he is very happy with the way he has bowled after a long lay off away from the game as there was no season going on. He said that the short bowling is working on this wicket as there is variable bounce. 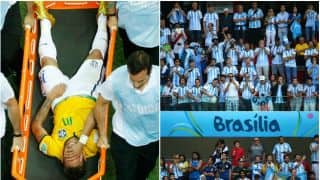 Argentina fans' reaction to Neymar's injury: Ugly incident in Football shows Cricket is a gentleman's sport, after all 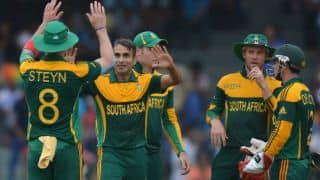