England are playing for pride: Ian Bell
By CricketCountry Staff

England are looking desperate to avert a series loss, in what could be a historic series win for Sri Lanka. After setting a target of 350, England batting was ripped apart by Dhammika Prasad who picked four top order wickets with virtually nothing on board. The Lankans have never won a Test series in England and they are as close as it can get to completing a comfortable win. England batsman Ian Bell reflected back on the disappointing day and said that they had let the team down and will be playing for pride to save this match.

“We’ve let ourselves down. It was an opportunity to get ahead in a Test and win a Test match. Herath played an outstanding knock . It was disappointing that we didn’t bowl in the right areas. Hopefully we’ll show some fight on the fifth day,” Bell said.

England bowlers were dominated by Angelo Mathews who hit his second consecutive Test ton. Mathews and Rangana Herath shared a record 149-run eighth wicket stand to set an imposing target for the hosts to chase. 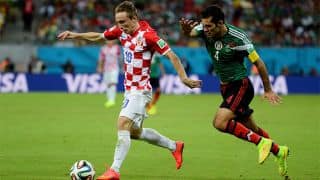