England captain Eoin Morgan has said the potential of Ben Stokes is "through the roof" as his century helped England knock Australia out of the ICC Champions Trophy 2017.

Q. Eoin, 35 for 3 was looking a bit tricky, wasn’t it? What did you say in that rain break when you came off?

Q. You like to come out and play the first few shots, I suppose, when you got Ben Stokes with you at the other end, that’s the way to go, isn’t it?

EOIN MORGAN: I think so. Personally, for me, you have to earn the right for guys to make mistakes with the ball. So I did what I do, and obviously, Ben’s very naturally aggressive and finds attacking quite easy. So, yeah.

Q. You played with him for a long time, but does he keep surprising you?

EOIN MORGAN: Yeah, his potential is through the roof. You know, I think he bowled four overs in his first spell, and then to go back to him at the end with two of the hardest overs to bowl, you know, sums him up. He took it on his shoulders. He did it at the IPL. He did it really well.

And then his batting was exceptional. Very calm at the crease, very relaxed. All those games he’s played really came to the fore today. He was outstanding.

Q. Just on Ben, you know, possibly match-winning or match-defining performance, runs out his captain. Talk us through that.

EOIN MORGAN: Yeah, it wasn’t — it was a mess up — the two of us, I think, were ball watching. I didn’t hear what he said. I turned around, and he was beside me. If he would’ve missed the stump, I would have been in, unfortunately, but when he goes and wins the game like that, it didn’t really bother me.

Q. I’ve got a couple. Just still on Ben, how lucky do you feel as a captain to have a player like that? Every team would want him on their side, wouldn’t they?

EOIN MORGAN: I think so. I think the IPL auction proved that. He’s always looking to influence the game — bat, ball, or even in the field. Even in the field today at mid-on, he saved a lot of runs where guys nearly nick him in order to gain momentum. Even went through a period today of about five overs where he was unbelievable. He always wants to be in the game.

That attitude in itself, you know, a lot of guys with potential like that, when things aren’t going your way, go back into a corner, but that’s not Ben.

Q. Just the campaign so far — through to the semis, three wins. Do you have the belief now that you can go on and lift the trophy?

EOIN MORGAN: I certainly think, game on game, we’ve grown in confidence, certainly with our bowling. Our bowling unit is looking on form. The last two games, we’ve proved that we can peg sides back regardless of where they’re at going into the last 15 overs of the game, which are normally, probably three, two years ago, a bit of a car crash for us. So that’s a huge improvement. And our batting just seems to strive, yeah.

Q. Eoin, one aspect of the batting that’s struggling is, obviously, Jason Roy. You said some things at the start of the tournament about backing him. Have those sentiments, do they remain, or would you have to think about making —

EOIN MORGAN: Yes, it’s unfortunate that Jason didn’t get runs today. We’re obviously three games into a tournament, and we’ll take a couple of days to have a look at what our best team is for the semifinal, as we always do, also have a look at the wicket.

Q. So you are prepared to sort of revisit that for —

EOIN MORGAN: We revisit it every game. Everybody’s position, whether it can be changed around, can we do anything better? And that’s where we come up with the mad ideas.

Q. Eoin, given the situation, the opponent, and the bowling attack you’re up against and the batting lineup as well, would that be one of the best results you’ve had since you became captain?

Q. Really confident performance from Adil today. You left him out the first game, didn’t you, which was — how did you do that and keep his confidence so high?

EOIN MORGAN: He’s quite a relaxed character, Adil. Him and Moeen have been very open to the fact that we’ve got to go in with different balanced sides each time. Moeen was left out of the Ireland games and came back in at Leeds and pretty much won us the game with the bat and bowled really well.

Everyone within the group knows the page we’re on at the moment. We’re trying to win games of cricket, and everybody has bought into that fact regardless if they’ve played or not.

Q. I’d just like to ask you, do you think — if England can go on and win this tournament, do you think it can be the catalyst for a period of domination over the next few years, looking at what you have at your disposal?

EOIN MORGAN: I think you’re getting way ahead of yourself. A start would be winning the semifinal. I said before that beating a side like Australia in a game where we’ve nothing to gain is a big step forward for us because we beat one of the better sides around the world, and if we’re being serious about competing in future tournaments, we need to win games of cricket like this.

Q. Eoin, I’ll double barrel it because it may be the last question here. When you made the incision and got on top of Australia, did you feel like they fell pretty quickly, they were a bit fragile? Second, how much of an influence was the crowd in the Hollies Stand as things took off and kicked off in that session as well?

EOIN MORGAN: Are you actually talking about the last 15 overs?

Q. Yes. After the rain delay, how important was the crowd? And at the same time, did you feel Australia were a bit fragile?

EOIN MORGAN: No, probably not. No, they’re a very threatening side. I thought the way in which we played forced a few errors here and there. They obviously bowled exceptionally well up front. And the crowd here have been brilliant for us for the last couple of years. They get right behind us. I don’t think there’s anything malicious in it, but they come, have a good time, and hopefully we entertain them.

Q. Eoin, you briefly mentioned Adil Rashid. What do you think has been behind his rise in prominence, especially over the last year or so?

EOIN MORGAN: I think he had a really tough time in India, and that was highlighted quite a lot, particularly with the red ball, certainly with the white ball. We understand where he’s at and where we want him to be at, and then managing that around a difficult period is important because he needs to be in a head space where he can learn from situations like that.

A lot of people go to India as a spinner or a young spinner and don’t come back from it. But from where he was there to where he is now, I think is — you know, a completely different bowler because he has learned from playing against some of the best on some of the flattest wickets in the world. So when he comes up against a good opposition and there is a bit on offer, he can take advantage of that.

Q. Do you think he can still play red ball cricket for England?

EOIN MORGAN: Absolutely. There’s no reason why he can’t. 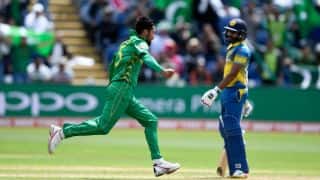 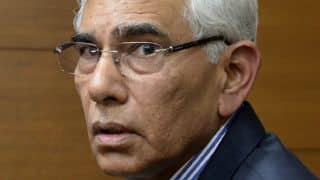