On the eve of the ICC Champions Trophy final against Pakistan at The Oval, India skipper Virat Kohli hinted at playing the same combination.

VIRAT KOHLI: The biggest thing is to stay off social media. Honestly, it sounds funny, but it’s so important to stay away from those things, to connect to things that matter, the things that a sportsman needs to take care of. You know, connecting to yourselves within, taking a bit more time to do stuff which you don’t normally get to do and stay away from everything. It’s tough, but you have to make that sort of effort to stay in a good zone and a good mindset, to be happy playing second fiddle in a big tournament like this throughout in all the games to be thinking about bouncing back after a setback. All those things I’ve learned a lot how to handle certain things. And that can only happen when you’re able to connect with yourself first. If you’re too distracted listening to too many suggestions or praise or criticism, then you can’t focus on what you need to think as a sportsman first to be able to lead the team and then help the others in the team, as well. Yeah, that’s probably been the biggest learning. To be able to maintain that balance nicely has been a good thing for me.

Q. What steps have you taken already to take your players away from the pressure?

VIRAT KOHLI: We’ve never — until now we’ve never spoken of the semifinal in any different way. We haven’t spoken about this game in any different way. We’ve practiced the same way from the first day we came here. Even today’s practice was absolutely similar. There wasn’t any drop of intensity or something extra. There’s no overexcitement. People are just doing the normal things that they do in any practice session, and that’s the kind of approach we have maintained throughout the tournament, and as I said last time, it’s just another game of cricket tomorrow, and whatever the result, we have to go forward and play more games after that. The more relaxed you stay in these kind of situations, it’s a good thing because it helps you take better decisions when you are composed and calm mentally and you can help the team come out of difficult situations only if you’re thinking in that fashion. We have changed nothing from the first day we came here honestly.

Q. You have always performed well in pressure games. What do you tell youngsters? What is the key to performing in high pressure games like this as a batsman and also as a captain?

VIRAT KOHLI: I feel it’s — I mean, everyone knows after you reach a stage in a tournament like this, you can’t basically work on your techniques any more than with the ball or with the bat. It’s how you think about the game and how you prepare for big games. As you said, you have to believe in yourself no matter what. You know, the ability to think otherwise in a difficult situation is something that sets you apart in that situation and actually pulls the team through. So if you are thinking we are three down and I might get out, then you will get out. If you’re thinking we’re three down, I’m going to counterattack and get the team back on track, it ends up happening because you’re convinced about it. So that’s something that I work on, I visualise a lot, and I see myself in difficult situations and actually convincing myself that I can pull the team out in those situations. It won’t happen every time, but eight out of ten times it will end up happening because you’re so convinced about it. So I think it’s how you prepare mentally is key in big games. That’s something that I’ve worked on, and it’s really worked well for me every time I’ve visualized and I’ve thought positively about the big games.

Q. Playing against a team like maybe apart from Amir, Hafeez or Malik, most of them are unknown entity. Does it at times also makes it easier because there’s too much analysis, you can play freely because you are not dissecting each and every opposition?

VIRAT KOHLI: It really depends on individuals, how they want to prepare against certain players in the opposition. I have never believed in watching too many videos of anyone. I prepare the best way I can. I believe in my abilities, and I feel like if I’m good enough, if I’m technically good enough, I should be able to counter any bowler that’s bowling to me. I don’t take extra pressure thinking he’s bowling from here, what if he doesn’t do that in the game. So I think of those things. I like to go by what I see coming out of the hand, and yeah, I mean, whether you have played people before or you haven’t, this game, as I said, you cannot guarantee a performance. Even the bowlers that you play regularly, on a tour or throughout a series, two matches you’ll be on top of them, third match they can nick you off. It’s basically how you react to every ball that’s bowled to you regardless of whether you’ve played against the guy or you haven’t. You have to be good enough to counter it, and that’s the mindset we’ve been playing with in this tournament, and we’re going to try to continue the same.

Q. How relevant is the first game that you played at Edgbaston between yourselves and Pakistan, and are you confident that this final could probably showcase again the best of Pakistan and Indian cricket together, given that you don’t play series against each other, that perhaps a positive message for the future could be there, too?

VIRAT KOHLI: I don’t see any relevance of the first game here because you can never tell how a particular team starts a tournament. Some teams start very confidently and then they fade off. Some teams might not have the best starts, and they come back amazingly, which Pakistan has done. So everyone is aware of the kind of talent they have in their team, and on their day they can beat any side in the world. That’s the kind of players they have, and that’s the kind of ability they have in their side. So we’re quite aware of that. But at the same time, neither are we too intimidated nor are we too arrogant about what we are doing. It’s important to maintain the balance of being confident in your own skill and what you are doing as a team.

Yeah, I’m sure it’s going to be a very good — very well-contested match. Both teams obviously want to win the final. They’ve worked really hard to be there, to stand in the final, and I’m sure that every player is going to come out and give their 120 per cent, and if 11 players from both sides end up doing that, it’s going to be an exciting encounter. I don’t see any relevance of the first game in this one.

Q. Virat, Hardik gives the team a certain balance, but he’s also at times targeted by the opposition. How tempting is it to perhaps go in with Shami in a game like this?

VIRAT KOHLI: Not looking to change too many things, because I’ve said this before, I would back a guy like Hardik who provides you so much balance in conditions that he can be effective as a bowler, and his batting is priceless. If you’re chasing a total and you need eight an over and you’ve lost wickets, he’s a guy who can still win you the game. That’s the kind of belief he has in his ability and we have that belief in him. You know, he can give you a match-winning performance in any game that he plays, and a gun fielder, as well. It’s very hard to find a package like that. You need to back guys like him on a regular basis, and you will get those results where the team is in crisis and he stands up and gives a match-winning performance. So far he’s been really good in the tournament. When he bowls well, it’s a total relief for me as a captain because he can get you seven good overs. He can get you a couple of wickets, as well, and then with the bat and the field we know anywhere. Yeah, I would not think of changing anything at this particular stage.

Q. There won’t be any social media when you get in the middle tomorrow, but there will be more than a billion people watching every move you make. Can you give an insight to a normal person how you deal with that attention?

VIRAT KOHLI: It’s been quite a few years I’ve been dealing with that, so nothing new. Honestly, you can’t think of those things when you step onto the field. It’s, again — I know there are expectations. I know there are people that expect the team and myself to do well every time that we play, but I understand as a player and as a person that it’s not possible, so it’s very important to realise the things that might or might not happen in the game, and you have to be close to reality. You can’t live in a dilemma and then think on those lines where you do end up thinking what people are expecting back home. You have to focus on what you have to do on the field. So this is a part of being an Indian cricketer and then having performed for a few years obviously expectations go up. You have to find a way to deal with it. You can’t ignore it. You have to maintain a balance and then focus on what you need to do on the field. I think I’ve been able to strike a good balance until now, and yeah, I’m sure I’ll be fine for tomorrow.

Q. You’re probably aware that there’s another India-Pakistan match tomorrow here. Have you ever tried your hand at hockey? Have you watched hockey?

VIRAT KOHLI: I’ve played with synthetic hockey balls indoors, but never tried hockey. It’s very scary I feel, getting hit on the face with a penalty corner. I don’t know how those guys do that. You need a lot of guts to do that. I wish our team the best. I’ve never tried my hand in it, but they’re pretty good, so I’m sure they’ll be fine. 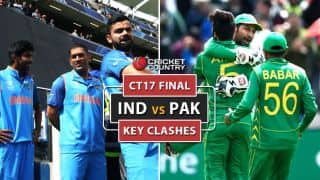