MARTIN GUPTILL: We did some very good things in that last game, and it was unfortunate the rain came when it did.

Q. Performance like that must give you some confidence having Australia in some trouble?

MARTIN GUPTILL: Absolutely. We did some very good things in that last game, and it was unfortunate the rain came when it did. But at the end of the day we can’t control the weather. So we take the positives from that game moving forward to this next one.

Q. Last time you played England you ran into them after the World Cup here, didn’t you? And obviously they bat very deep. They have quite an aura about them sometimes because they just come in and sort of blaze away from the walkup?

MARTIN GUPTILL: I think it’s very much a new-look England side over the last couple of years and it’s worked very well for them. It’s sort of a similar brand of batting to the way we’ve gone about our business the last few years as well. So it’s probably going to be a pretty exciting game tomorrow and I think fans are looking forward to it.

Q. Did you kind of take some satisfaction in the way that England, in a way, kind of copied your style and the fact that you were the team that really got them going in 2015 and have a look back from there? Do you take any satisfaction from that?

MARTIN GUPTILL: No, I don’t think so. It’s just we play our way. They play their way, which is a similar brand. And it works for both teams. You know at the end of the day they do their stuff, we do ours. So I don’t know about you guys, but I’m looking forward to tomorrow.

Q. The way that New Zealand played back in the build-up to 2015, obviously getting to the final. Sort of the way Brendon kind of inspired the style of cricket, it seems to have been adopted not just by England, but 50-over cricket across the board. Do you think that’s given it a shot in the arm that people are much more excited about 50-over cricket based on how you guys started?

MARTIN GUPTILL: It may be a wee bit. The 50-over game keeps changing with different rules coming in and different rules and things like that. But I think it makes it more exciting. It’s a game that’s long enough to keep people, to be able to showcase your skills and short enough to keep people interested and the crowds as well. And it makes for some pretty good watching having a couple of teams going head to head.

Q. How are you enjoying the Welsh weather so far? And are you optimistic, pessimistic for tomorrow?

MARTIN GUPTILL: I’ve been here before playing for Derbyshire, and it hasn’t been great weather then either, but look, at the end of the day we can’t control the weather. So, whatever happens tomorrow happens. We’ve just got to deal with it.

Q. These are obviously nervous and anxious times for sportsmen in this country, for anyone who goes to an event with crowds. Can you tell me you and your team’s thoughts on Saturday, what instructions you’ve had from the management on security and so on? Particularly when the event started to happen on Saturday, the ICC issued a statement saying all hotels, team hotels had gone into lockdown. What did that mean exactly for you?

MARTIN GUPTILL: First of all, on behalf of the Black Caps, I’d like to let people know our thoughts and prayers are with the victims and their families through this tough time.

And regards to the security, ICC have assured us that our safety is their number one priority and they keep giving us updates daily about what’s happening and what their plans are for us. So we feel very safe at the moment.

Q. How would you compare Kane and Joe Root as batsmen?

MARTIN GUPTILL: One is called Kane and one Joe. Obviously, they’re both world-class players. They go about their business in very different ways. And they can both be destructive without hitting those massively big shots; they kill teams softly.

So if either one gets in, you know, it could be a long day for whoever are in the field.

Q. You said they go about their business in different ways, can you elaborate on that; how do you mean by that?

MARTIN GUPTILL: Probably contradict myself here. They’re pretty similar. I mean, you’re not going to go out and blast at a 160 strike rate through the innings where someone like Brendon McCullum will come out and do his thing right there.

They’ll build an innings. Their batsmanship is ridiculously unbelievable. They know the game inside and out, and their own games, they know where there are areas to hit, where they can to certain bowlers. So it’s a master class when they get going.

Q. Do you think all batting lineups are going to need a bit of glue, somebody to hold things together while the other guys around him blaze away?

MARTIN GUPTILL: I guess it gives a bit of stability. If you get two guys at the top they can get away on you. It can set the game up for a massive total, obviously.

And if you lose a couple of wickets early, obviously you need someone to be able to build an innings and relay that platform for the rest of the order to come in and have a go at the end.

Q. With scores going up in One-Day cricket as they have, as someone who plays at the top of the order, has it become increasingly difficult when batting first to know what to set your sights on?

MARTIN GUPTILL: I never really know what to set our sights on, to be honest. I just sort of go out and play.

If you have a total in mind and you don’t reach it, your team is going to be a bit disappointed. But, look, at the end of the day, if you can set a good platform, 300 is easily achievable, batting first or second.

So that’s the key to it is just to set a good foundation for the rest of the team to be able to go big towards the end.

Q. Top of the order, it was a very brisk start that you and Luke Ronchi got off to the other day, perhaps trying to kill teams noisily. The way you two bat, with two explosive hitters at the top, how do you go out there and approach that? Does someone take the lead? Do you just see how it goes to pave the way for Kane to come in?

MARTIN GUPTILL: It just sort of happens. I probably got off to a little bit of a quicker start than Luke the other day, and it could be different tomorrow. We’ve just got to wait and see.

I think I tended to hog the strike a wee bit more the other day, so it allowed me to be able to get in a bit quicker and get a few shots through the infield.

Q. Does that change if Tom plays at all?

But whether it be One-Day or Twenty20, I look to go out and create a strike rate at the top of the innings for the rest of the guys to be able to come and play their games.

Q. Obviously England without Chris Woakes now in this tournament, what do you make of their bowling attack? Do you feel that they can pose some problems for your batsmen?

MARTIN GUPTILL: Any bowler can have their day. Obviously Woakes has done extremely well in One-Day cricket over the last couple of years. But obviously with Finny coming back into the side, he’s proven himself time and again for the England team.

And, look, we have to go out and prepare well. Obviously we couldn’t get outside today, which is unfortunate. But we’ll look at footage of their bowlers and make sure that we know what they’re capable of.

Q. Do you play with Eoin Morgan at Kings this IPL?

MARTIN GUPTILL: Yeah, I did.

MARTIN GUPTILL: A little bit. At the start of the tournament we weren’t playing a lot. So, yeah, got to know him a little bit. He’s obviously got a great cricket brain and he’s in some pretty good nick at the moment, with those couple of innings before the tournament started.

Q. The sort of image he has is that he’s kind of a calm, almost like an ice man, when he’s batting and captaining the side, is that the way you see him?

MARTIN GUPTILL: I think I only played one game with him at IPL. And I was out the first ball of the game, so I didn’t get to bat with him. He does seem like that. He’s not so much emotion when he’s out in the middle in the field. So you see that he’s got all that in check and he’s always on top of things. So he’s done very well for himself.

Q. If the Australia/Bangladesh game kind of ends up being splitting points, does it change anything for you guys tomorrow, the approach or how would you approach it?

MARTIN GUPTILL: Not really. We can’t let that dictate the way we play. We still have to go out and do our things to be aggressive and take it to the opposition. If we take a step back, then we’ve already lost the game before stepping out there. So we’re just going to keep going the way we are. 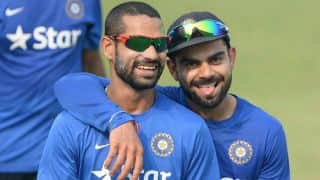 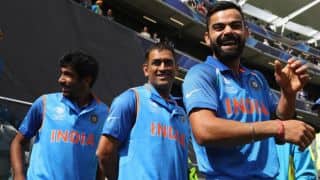