With South Africa busy hunting for their next coach, skipper AB de Villiers has expressed his keenness for Russell Domingo to continue as the head coach of the side.

Q. I just wanted to talk about the toss, what was discussed before the game? Was it a decision that was made this morning when you looked at the conditions and the pitch?

RUSSELL DOMINGO: Yeah, we hadn’t seen the pitch until we got here today, it’s been under cover for two days. And generally we just thought, it’s the third game on this pitch in the last five or six days. It’s a used pitch. You generally think Pakistan’s spinners are a big strength of theirs, so we tried to make first use of the wicket. We sort of knew there might be a chance of rain, but we also had some reports saying that it might come after 11 o’clock and the game was scheduled to be finished at 9.00 or 9:30, whatever it was going to be.

Look, hindsight is a great sight. It didn’t work out for us today. We just thought we would make first use of the wicket, considering it’s the third game on that particular pitch in the last five or six days.

Q. Is it a bit of a concern how South Africa played Pakistan’s spinners today?

RUSSELL DOMINGO: Not a concern. Generally our sides play spin really well. We pride ourselves on the way we play against spin. The way we played India in terms of the One-Day cricket in India, we played really well against the Indian spinners in Indian conditions.

I think the disappointing factor is that, not one of our top four, I suppose got through the new ball to look after the spinners. So every time there was a new batter coming in facing the spin, that’s always going to be tough to do against quality spinners.

Q. Is there something about this Pakistan side when they get going that tends to wreck the best-laid plans?

RUSSELL DOMINGO: Pakistan, I mean, they are a proud cricketing nation. I know when they have a bad game, everybody jumps on their back and says how bad they are. I can tell you now, in our position, I don’t think they are bad at all. They are a dangerous side. They have some world-class players. They are always going to be a threat.

Q. Do you think there was a degree of complacency after Pakistan’s hammering against India? Nobody expected them to perform so well especially with the bowl.

RUSSELL DOMINGO: No complacency on our side. We played a game of cricket; Pakistan played better than us. That’s nothing to do with complacency today as far as I’m concerned.

Q. Because of South Africa getting in a lot of matches because of the England series and you know being labelled as one of the contenders for this crown? Is there something playing on their minds at all, because they have yet to win a big tournament, has this been a talking point in the camp at all?

RUSSELL DOMINGO: No, not at all. We know that there’s a lot of talk about us having not won a competition for a long time.

There’s nothing we can do about it. It’s outside of what we can control. We’ve just got to focus on playing good cricket and preparing well. We haven’t played good cricket today.

We have to take that on the chin and acknowledge that our performance is not as good as what we can put together. So we have some thinking to do and planning to do going into Sunday’s game.

RUSSELL DOMINGO: No, not at all. He’s a quality player. Everybody gets a first-baller. It’s just taken him 200 games, I suppose, there’s always going to be question marks. I have no concerns about AB de Villiers.

Obviously he did pick up a little bit of a niggle with his hamstring today, but the medical team will look at him. I can’t comment on it until they have had a look at it. But I’m by no means concerned. I’m expecting him to put in a big performance on Sunday. He’s that type of player; that when the team needs him he’ll turn it up on Sunday. I’m sure about that.

RUSSELL DOMINGO: I’ll have to sit with the selectors, there’s no doubt about that. We always pick what we think is our best 11 on the day and pretty much dependent on conditions. We considered, we should play a second spinner today because it was a used wicket. We considered, should we play another all-rounder to give us a bit more batting depth because we thought the wicket was going to be a little bit slower.

So we took all that into account, and we’ll take that into account when we get to the Oval on Sunday. So we’ll sit down closer to the time with the selectors and come up with what we feel is the strongest 11 on those particular conditions. 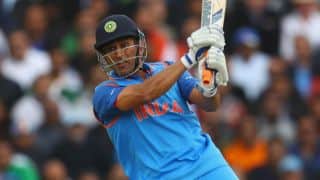