India A vs Australia A, 2014: Batsmen rules AB field

India A vs Australia A, 2014: Batsmen rules AB field

India A batsmen put up a good show at the AB field against Australia A.

A record 371-run partnership between Mitchell Marsh and Sam Whiteman rescued Australia Afrom the brink of a collapse to 522 for nine at stumps on Day Three of their four-day match against India A at the Allan Border Field in Brisbane on Tuesday. The Western Australia teammates came together on Monday evening with the hosts reeling at 99 for six and resumed play on Tuesday at 126 for six. The partnership ended at 470 for seven, having set the second-highest partnership for the seventh wicket in First-Class cricket history.

With India A declaring at 475 for nine and ending Day Two with the home team down at 126 for six, the visitors were in total command of the match before Marsh and Whiteman changed the course. 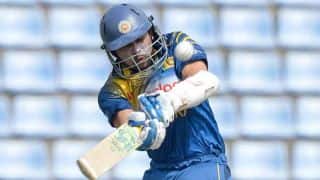