New Zealand cricketers James Franklin and Colin de Grandhomme became the latest duo to combine at the boundary to take what has by now become almost a regulation catch. Nathan McCullum was the batsman who was dismissed, getting a leading edge off the bowler.

Playing for North against South, Franklin was fielding at long-off when left-arm spinner Ronnie Hira flighted one only for McCullum to get a leading edge. Franklin took the catch running backwards, but saw that he would soon go over the ropes, so he threw the ball back into the field of play. Meanwhile de Grandhomme, fielding at long-on, ran in to accept the catch. 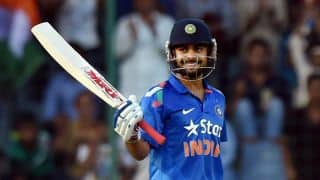