Joel Paris, the Western Australia player, took a magnificent catch during a recent domestic match in Australia. Standing at short third-man, the batsman played an upper cut over him. Paris ran back and judged it and then dived forward to take a magnificent catch just before the boundary. It was a magnificent catch by the player and he made good ground and got it very well. This is a very good example of how to take a catch while running back. Paris recently impressed during the Champions League T20 (CLT20) 2014 while playing for the Perth Scorchers. Paris is a good prospect for Australia for the future. 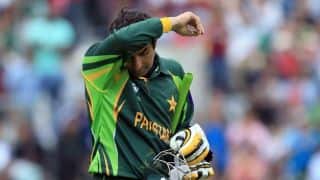 Misbah-ul-Haq gets support from Javed Miandad