Naman Ojha's views on splendid double century against Australia A

A superb double ton from Naman Ojha took India A to a strong position against Australia A on Day Two of the four-day match held at at the Allan Border Field in Brisbane. Actually, wicketkeeper-batsman Naman took his team to 475 for nine declared with an innings of 219 not out. The visitors then, snared six Australia A wickets to end the day in a great position.

In fact, resuming the day at 304 for six, India A batsmen continued to score runs with utmost ease. Naman, batting on 82 not out, brought up his century with a superb six. His 99-run partnership with Dhawal Kulkarni though, finally came to an end when Kulkarni lost his wicket for a well-made innings of 33. Cameron Boyce was the bowler who took his wicket for Australia A.

First Published on
Last updated on July 8, 2014 7:37 AM IST
TOPICS:
Australia A Australia A vs India A Dhawal Kulkarni India A India A tour of Australia 2014 Naman Ojha 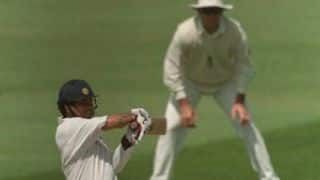