New Zealand have made just one change for the upcoming tour of India.

New Zealand have made just one change for the upcoming tour of India. Pacer Tim Southee makes a comeback in the New Zealand line after a brief injury lay-off while the operating spinners would be Nathan McCullum and Kane Williamson.

New sensation Adam Milne is expected to make inroads while the Corey Anderson is expected to continue his big hitting prowess in the short New Zealand grounds.

The 13-player squad, which drew the series 2-2 against the Caribbeans, was more or less retained with reserve batsman Colin Munro, who will return to play for his provincial side, being the only omission.

The BLACKCAPS selectors have named a settled line-up for the ANZ One-Day International Series against world No 1 India starting in Napier on Sunday, New Zealand Cricket (NZC) said in a statement.

The squad for the five-match series is identical to the one which drew the recent ODI series against the West Indies, with the exception of Auckland batsman Colin Munro who will return to play for his province.

General Manager National Selection Bruce Edgar said the players had been rewarded for a number of strong performances against the West Indies.

It was pleasing to see every player stand up at some stage of that series and there were some simply outstanding efforts headlined by Corey Anderson s world record one day ton, read a PTI report. 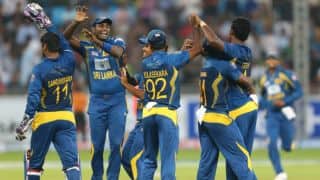