Devendra Bishoo's dismissal of Brad Haddin is being touted as the 'Ball of the Century'.

West Indian leg-spinner, Devendra Bishoo seemed to be in a sensational form after having already claimed six wickets so far in the first inningsagainst Australia on Day 2 of the first of the two-match Test series at the Windsor Park in Roseau, Dominica. Off his six wicket haul so far, the magic came, when he bowled out Brad Haddin off a brilliant leg spinning delivery, which was slighted and turned beautifully after pitching in between middle and off stump, as it went on to sharply hit the top of the stumps, leaving Haddin speechless on his dismissal. It is being called the ‘Ball of the Century’. LIVE UPDATES: West Indies vs Australia 1st Test, Day 2 at Dominica

It was about 22 years ago, when Shane Warne bowled a similar delivery during the Ashes series in the opening Test at Old Trafford in order to get rid of Mike Gatting. The delivery dropped just outside the leg stump and spun across Gatting to hit the top of his off stump, as Gatting was spell-bound with the delivery and was standstill as a statue, imagining that how on earth did that happen. It was also termed the’ Ball of the Century’ at that moment, and Bishoo just showcased the replay of the talent against the team that produced the magic, 22 years ago. 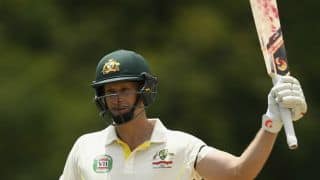 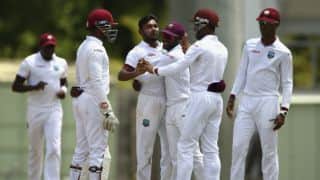