Zimbabwe captain Elton Chigumbura feels that Chris Gayle is a hard guy to bowl to and Zimbabwe didn’t bowl well in the last 15 overs of the game. Gayle who scored 215 off 147 runs which included 16 sixes took West Indies to a total of 372. In return, Zimbabwe were bundled out for 289.

“Chris Gayle is a hard guy to bowl to when he starts hitting, so some of the plans you might try to put them into play but maybe the way we bowled our execution wasn’t right. The percentage was maybe 80 out of a 100 on execution. It has cost us and it’s not the first game that we are giving away too many runs at the end.We just have to go out and work on our last 15 overs,” said Chigumbura. 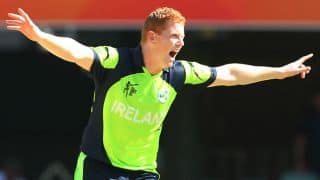