Nathan Lyon: Hope Chris Rogers is back on his feet soon

Nathan Lyon: Hope Chris Rogers is back on his feet soon

Chris Rogers is set to retire after the Ashes later this year.

Australia suffered a major setback as opening batsman Chris Rogers was hit on the head during training and has been ruled out of the first Test against West Indies beginning on Wednesday. The team doctors say that Rogers suffered a concussion. Off spinner Nathan Lyon has extended his support to his teammate saying that he hopes that Rogers is back on his feet soon. READ: Rogers to miss 1st Test against Windies due to concussion

Rogers a couple of weeks back announced that he will retire from international cricket after the Ashes. He is however set to recover in time for the second Test. Lyon , on the other hand is just four wickets away from becoming Australia’s most successful off spinner. Australia have not yet named their playing XI yet as coach Darren Lehmann had earlier said that the team will take a late call on that. The injury to Rogers just adds to Australia’s headache. READ: Jason Holder hopes his Dominica debut results in a successful outing for West Indies 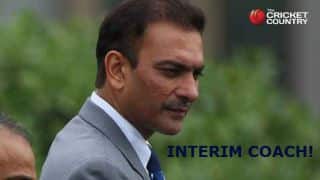