Dhoni, who retired from Tests in 2014, had a chat with kid before shaking hands.

Even off the field, former India captain Mahendra Singh Dhoni manages to grab eyeballs. The experienced wicketkeeper-batsman, who has been sidelined from the upcoming Twenty20 Internationals against Australia, made a young fan’s day on Children’s Day on Wednesday, one of the reasons why Captain Cool is revered by so many.

A video of the 37-year-old Jharkhand glovesman greeting a young fan from his car has gone viral on social media. Dhoni, who retired from Tests in 2014, had a chat with kid before shaking hands.

Dhoni was also not picked from the recently-concluded T20I International series against West Indies, which the hosts won 3-0.However, Dhoni still forms an integral part of the team and will be in Team India’s plans leading to the ICC World Cup 2019 in England and Wales.

Dhoni has had a remarkable career leading India to titles in the ICC World T20, ICC World Cup 2011 and the Champions Trophy. He was also the captain when India became the No.1 side in the world. 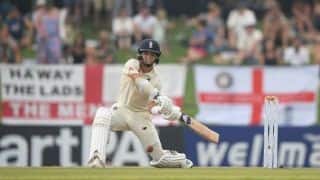