Skipper Michael Clarke failed again as Australia lost a four-day warmup game against Pakistan ‘A’ by 153 runs in Sharjah on Saturday. Clarke, who is recovering from a hamstring injury and needed some batting practice ahead of Wednesday’s first Test against Pakistan in Dubai, managed just five off as many balls before he was bowled by left-arm paceman Rahat Ali on the fourth and final day at Sharjah stadium. Clarke made just ten in the first innings but not much can be read into Australia’s loss as the match was meant for practice only. Australia, chasing 339 to win were bowled out for 185 in their second innings with paceman Mohammad Talha (3-32) and left-arm spinner Raza Hasan (3-60) destroying Australia’s plans for some useful practice. Pakistan ‘A’ had made 305-8 declared and 306-3 declared in their two innings, AFP reported. Shane Watson: I am very passionate about coaching 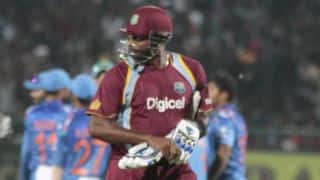