The Sydney Cricket Ground (SCG) authorities unveiled a permanent memorial for the late Phillip Hughes, who died after being struck by a bouncer during a domestic game at the venue recently. The unveiling occurred before the start of the fourth and final Test between Australia and India, the first day of which is scheduled to be played on Tuesday at the venue.

Hughes was batting on a score of 63 during the Sheffield Shield game between South Australia and New South Wales on November 25 last year, before being struck on the neck by a Sean Abbott bouncer, despite wearing a helmet. Hughes collapsed on the field and was airlifted to a hospital immediately, where he was in a critical condition for two days, before breathing his last on November 27.

His death had a major impact on the cricket fraternity, with tributes and condolences pouring in from cricketers and fans alike. Several current and former cricketers had attended his funeral at his hometown of Mackesville in New South Wales. A minute’s silence was observed at the start of several matches, including the first Test between Australia and India at Adelaide. 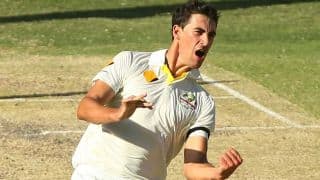 India vs Australia 2014-15, 4th Test in Sydney: Australia off to good start