Former India batsman Sachin Tendulkar shared an interesting incident that involved himself along with fellow master batsman from his era Rahul Dravid and retired New Zealand all-rounder Chris Cairns. Tendulkar narrated the incident in an interview with ex-Australian cricketer Max Walker in Melbourne.

According to the ‘Master Blaster’, him and Dravid were consistently getting beaten by Cairns’ reverse-swingers during the first Test between India and New Zealand at Mohali. India were in a precarious position during that time, getting bowled out for a paltry 83 in the first innings, before conceding a 132-run lead to the Kiwis.

Tendulkar walked up to Dravid during one of the overs, and informed him that he would be holding the bat in the direction of the shiny side of the ball (which is the direction in which the ball would be swinging). So if the shiny side was to the left, Sachin would be holding the bat on the left side, and vice-versa. The move worked well as Dravid began to get the boundaries along.

Tendulkar and Dravid went on to share a 229-run partnership for the third wicket, with both scoring their respective centuries. India reached a score of 505 for the loss of three wickets as the match headed for a draw. 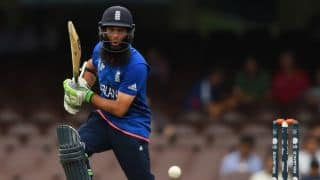 Moeen Ali run out for 19 against Bangladesh in ICC Cricket World Cup 2015, Pool A match at Adelaide 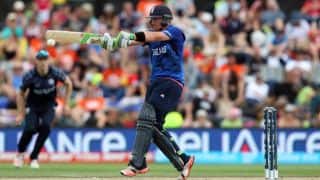