VIDEO: Abdur Razzaq scores an attacking half-century against Zimbabwe in 2013

VIDEO: Abdur Razzaq scores an attacking half-century against Zimbabwe in 2013

Abdur Razzaq, the Bangladesh left-arm spinner, scored a quickfire, unbeaten half-century in the One-Day International (ODI) leg of his team’s visit to Zimbabwe in April and May, 2013. Zimbabwe were trailing 1-0 in the three-match series after having drawn the Test series preceding it. Many batsmen in the line-up got starts but could not convert them to substantial efforts for a big total: as many as five batsmen scored between 24 and 36. Struggling at 185 for 7 in the 44th over, Razzaq struck four fours and five sixes to help push the run-rate to over five an over. Bangladesh were, however, not able to defend this total, losing to the home side by six wickets. READ: Bangladesh’s obsession with left-arm spin

This was Razzaq’s highest score in ODIs. His next highest is 35, also against Zimbabwe, in 2011. Razzaq’s batting credentials are reflected in his average in 153 ODIs: 13.43. He has only been selected for 12 Tests, between the years 2006 and 2014, suggesting the selectors’ reluctance to view him as suitable for the longer format.

For Zimbabwe, Sean Williams scored an unbeaten 78, his second highest ODI score, featuring six fours and a six. Others who chipped in with useful contributions were Malcolm Waller (39 not out), captain Brendon Taylor (37) and opener Vusi Sibanda (49). Zimbabwe ensured a victory in the third one-dayer as well, by seven wickets, to ensure a series win. READ:

Razzaq has not played for Bangladesh since August 2014. His last competitive match was in the National Cricket League, for Khulna Division, against Dhaka Division. 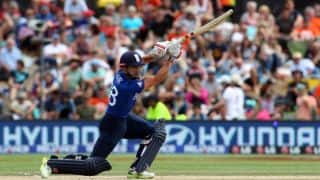