Flanagan said cricket's approach was admired and imitated by other sports trying to wipe out rigging.

The head of world cricket’s anti-corruption body, Anti-Corruption Unit (ACU), Ronnie Flanagan on Wednesday stressed education for young players as the key to stamping out the scourge of fixing and said success should be measured by prevention — not prosecutions. Cricket has battled for years against those seeking to rig both the overall outcome of matches and specific incidents within them, known as spot-fixing. The International Cricket Council (ICC) set up its  in 2000 after three international captains — Hansie Cronje of South Africa, Pakistan’s Salim Malik and India’s Mohammad Azharuddin — were banned for life for match-fixing.

Corruption reared its head again in 2010 when three Pakistani players were jailed and given long bans over a spot-fixing scandal in a Test against England. With big-money Twenty20 leagues springing up around the world, attracting billions of dollars in illegal betting, the challenge remains enormous. ACU chairman Flanagan said the ICC’s goal was not just to catch the crooks but to stop the problem at source.

“The main planks of our activity are prevention, disruption and only then investigation and prosecution — in that order of priority,” said Flanagan in an interview released by the ICC. “Education of players, particularly young players, is absolutely crucial to make them aware of the evil intent of people out there who would seek to have them drawn into their clutches and who would seek to corrupt them.”

Flanagan, formerly one of Britain’s most senior police officers, said cricket’s approach was admired and imitated by other sports trying to wipe out rigging. “We shouldn’t be judged by the number of prosecutions which have been engaged in,” Flanagan said. “We should be judged by the level of prevention we are able to bring to bear, and I think that’s a very positive story.”

The ICC met recently to chart the next stages of its strategy, but Flanagan warned corruption could probably never be wiped out completely. 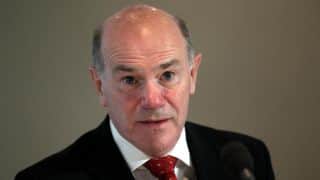