Ben Stokes scored a fifty for England, Mitchell Marsh chipped in with a couple of crucial wickets.

England all-rounder Ben Stokes realises the task his side have ahead of them in order to save this match. He believes that his side have to bat at least 150 overs  in order to save the match and says that if there is any pitch in which they can do it it will be this one. “We spoke briefly in the changing room there at the end and we’ve got to get our heads round the fact we’re probably going to have to bat 150 overs to try to save the game,” explained the Durham all-rounder. “If there’s ever a wicket to do it on, it’s this one,” he said. “I probably only need one word for it — flat. There’s no real demons in it, not too much pace and not too much turn.” READ: Shane Watson flexes muscles for camera during 2nd Ashes Test at Lord’s

“It was nice to get those wickets like that, it doesn’t matter how you get them, I’ll take a few more chop ons in the second innings,” Mitchell Marsh told reporters after stumps.

“The attack we’ve got, I’m certainly not going to try to blast blokes out,” said Marsh, appearing in his fifth Test but first since facing India at Brisbane in December. “But wherever the skipper [Michael Clarke] needs me I just want to be there for him and bowl whenever,” added the 23-year-old son of former Ashes-winning opener Geoff Marsh. READ: Ashes 2015: Stokes calls Lord’s wicket flat; Marsh happy to do bowl for Clarke 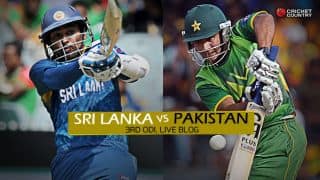