Australia‘s incoming vice-captain David Warner says that every Test match counts after he and his teammates enjoyed a good day one at The Oval on Thursday. Steady and effective batting by Chris Rogers, David Warner, Steven Smith  and Adam Voges has enabled Australia to gain the upper hand at stumps on the first day of the final Test at The Oval. Warner top-scored with 85: he pulled, late-cut, swept and drove to get his boundaries as he negotiated all the bowlers smartly. Smith, the No. 3, took over the role of the enforcer towards the latter half of the day on Thursday. VIDEO: Mark Wood speaks on ‘Guard of Honour for Michael Clarke 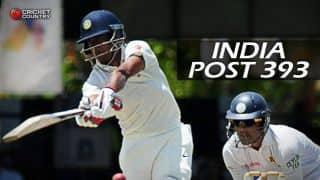